You are here: Home / Industry News / The Great Expansion of Venture Capital: A Ten-Year Progression 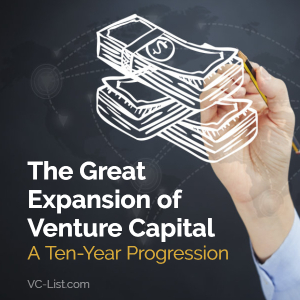 The 2010s was a decade that began in the shadow of the 2008 financial crisis and the ensuing Great Recession, a time when uncertainty was high and confidence was low. As the 2010s progressed, the pendulum started swinging in the other direction, allowing the decade to end with the economy and financial markets at or near all-time highs, as measured by most metrics. The venture capital industry is no exception, having been deeply touched by both ends of the spectrum.

By the end of 2019, deal count for the year was up from 2018 and was second only to the decade-high that was set back in 2015. Deal value for 2019 was only slightly lower than the all?time high reached in 2018. Over the course of the decade, fund sizes continued to grow, fundraising hit new heights, and new players streamed into the market.  According to Pitchbook, in the United States in 2009, only 119 funds closed raising a total of $11.9 billion, while in 2018, 257 funds closed raising $53.8 billion. This remarkable recovery was fueled by an exciting transformation in the industry that is evidenced through a number of fundamental developments.

In response to the constantly expanding demand of high-growth companies for additional capital to scale their business at speed, venture capital fund managers are raising larger funds and competing on the basis of fund size.  Spurred on by mega funds such as SoftBank’s $100 billion Vision Fund in 2016 and Sequoia Capital’s $8 billion Global Growth Fund in 2018, the aggregate capital raised reached a 10-year-high in 2018 and only retracted slightly in 2019.  Furthermore, the increase in size was felt throughout the industry with the average size of a venture fund topping $185 million, as the median fund size step up continued to rise.  At the same time, some fund managers, particularly among those focused on investing in seed and early stage companies, have deliberately contradicted this trend in the belief that larger fund sizes have the potential to erode investment returns.

To differentiate themselves from competitors, many venture capital firms have raised funds focused on specific industry sectors or subsectors.  While there have always been more focused funds, the degree of focus of these funds and the proportion of the funds in the market employing this strategy have increased over the decade.  Venture capital managers that made a strategic decision to maintain a consistent fund size (and some that were unable to raise larger funds) are leveraging their domain and professional expertise to attract startups that want to tap into their domain-specific knowledge.  Niche funds allow venture capital firms to be purposeful and strategic with their investments, cultivate a more thorough understanding of a market sector, and take a more active role in evaluating potential investments.  When combined with a smaller fund size, which requires the manager to make fewer investments and be more selective, it is a recipe to make successful exits more likely.

Even large funds that have a diverse portfolio of investments, like Accel, have become heavily involved in niche markets. Since 2010, Accel has invested in sixty-one cybersecurity companies, the largest number of any one fund.  Not only has the dramatic growth of the venture capital market created room for these specialty funds, but now many limited partners are demanding pure-play exposure to ensure that their portfolios match the industry subsectors they wish to specialize in.

Asset managers generally are increasingly looking to make socially responsible investments across all industries and asset classes, and to both public and private companies.  Many limited partners now demand that institutions are not only on the path to financial success, but also generate positive social or environmental effects with their investments.

General partners often view impact investing as a differentiator in both their ability to raise capital and their ability to generate returns. A 2018 study by the Global Impact Investing Network (GIIN) found that more than 90% of impact investors reported that their investments were meeting or surpassing their projections.[1] This is likely influenced by a growing consumer consensus to purchase from companies that have a socially responsible purpose or way of achieving their objectives. In 2018, Techstars launched Techstars Impact, an impact fund exclusively dedicated to “backing entrepreneurs tackling our most pressing global challenges.” Their portfolio includes companies like Zipline, which builds drones to deliver life-saving medical supplies, and Haven Connect, an affordable housing platform.[2]

The new market entrants come in many different forms.  First, as in past cycles, corporate venture capital tends to rise with increases in overall market activity. Companies view venture capital investing as a way to gain more involvement in innovative new companies in their industry, as well as a potential to use their deep industry knowledge to generate financial returns by picking the winners among the new crop of entrants.  Second, unlike past cycles, asset managers whose roots are in different investment strategies are crossing over into venture capital investing.  Some asset managers are simply acquiring or raising venture capital funds, while others are merely making venture capital investments with a modest allocation from an existing fund.  For example, in 2018, Blackstone acquired Clarus, a life sciences investment firm that focuses on funding growth-stage investments, and KKR created its own biotechnology fund, both turning to the venture capital market to capitalize on the opportunities for growth.  A parallel to both of these trends is for family offices to more actively participate directly in financing transactions, either alongside the venture capital funds in which they are a limited partner, or on an independent standalone basis.  Finally, some venture capital funds that typically only invested in seed or Series A rounds have also garnered more of an appetite to inject funds into later rounds, broadening their opportunities for investments in potential top-tier startups.

The evolution of the venture capital industry over the past decade has been as lively and momentous as the evolution in many of the industries which venture-backed companies have disrupted.  As we turn to the next decade, we expect these forces of change to continue to shape and impact the industry.  Notwithstanding the inevitable occurrence of an economic recession, the number and variety of venture capital investors will continue its upward trend.  New and existing funds will continually monitor and adjust their investment strategies in response to demand from both limited partners which provide the capital and the portfolio companies that accept the investments.  As the number of non-traditional investors grows, they will import additional strategies, techniques and disciplines from other asset classes into venture capital investments, which in turn could cause funds that have deep roots in the venture industry to respond.  We see no reason that the industry cycles that have existed since the earliest venture capital funds were formed in the middle of the last century won’t continue, although the timing and severity of the next downturn remains to be seen.  But, if venture capital has taught us anything over the past decade, it’s that anything can happen and that no stone will be left unturned by the best and brightest players in the space.

Caroline Duer Agan is an associate in Morrison & Foerster’s Finance Department. She is based in the firm’s Boston office.