You are here: Home / Startup & Funding Tips / How Venture Capital Is Changing to Adapt to the Global Innovation Landscape 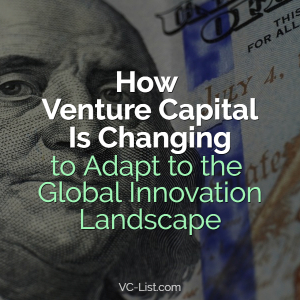 We errantly believe the venture capital model was invented in Silicon Valley. Its roots are much older. The modern VC model was adapted from a bygone industry – whaling in New Bedford. As innovation becomes global, the venture model is again being adapted to the new reality in other ecosystems.

New players are entering the market

Investment in innovation is no longer restricted to venture capital. Corporate investors are becoming a major driving force in innovation. Between 2013 and 2018, CVC investment grew fivefold, from $10 billion to over $50 billion, and today CVCs participate in nearly a quarter of all deals (versus 16% in 2013).[i] There are over a thousand major corporations with CVCs, including 75 of the Fortune 100.[ii],[iii] This includes everyone from Salesforce to Sesame Street. CVCs are increasingly international: 60% come from outside North America.[iv]

The CVC model itself is adapting. For instance, in China, powerhouse technology players like Baidu, Alibaba and Tencent (BAT) don’t just invest capital or seek to acquire companies. Leveraging their platforms, like Tencent’s WeChat or Alibaba’s Ant Financial, they can offer powerful distribution through their ecosystems.

Corporates of course are not alone. A range of new players are entering the market including family offices, hedge funds, and impact investors. The field is becoming more nuanced and often more crowded.

Historically, venture capital was a local game. For good reason: it requires deep knowledge of industry pain points, the political and regulatory landscape, and economic dynamics to be able to successfully support entrepreneurs. It’s also because Silicon Valley investors prefer to invest closer to home. An analysis of venture capital funds found that nearly two thirds of a Bay Area-based investor’s portfolio was in the Bay Area and 80% in the West Coast.[v]

For many Frontier venture capitalists, multi-regionalism is intentionally woven into the fabric of the firm. That’s because tech has becoming global. Moreover, innovation trends are no longer unidirectional from Silicon Valley, and today follow a global supply chain. Being global helps understand this.

This of course is not just a global phenomenon. Even in US: initiatives like Rise of the Rest are scaling venture capital in places like the Midwest.

Historically, venture capital invested preferred equity and decisions were made by individual partners judging the merits of the entrepreneurs and the business. These two dynamics are changing.

New investment structures are being tested. Notably, revenue share financing is on the rise (whereby investors purchase a portion of a startup’s revenue for a certain amount of time). A number of emerging venture funds pioneering this – unsurprisingly, many are outside Silicon Valley including in Dallas, Park City, Toronto, and Seattle.[vi]

Decision making as well is shifting. Artificial intelligence is becoming an increasingly important tool for venture capital sourcing and decision making in both Silicon Valley and the Frontier. Already, over 80 venture capital firms globally have publicly disclosed their artificial intelligence models. Many others are likely already doing this privately.[vii],[viii] For example, Social Capital (which is no longer raising outside capital) pioneered a model called Capital as a Service, or CaaS, which created algorithms to benchmark and predict companies’ performance objectively. If Social Capital’s algorithm liked what it saw, the company would write a check of up to $250,000.[ix]

By focusing only on impartial metrics, computerized decision makings helps support diversity. Among Social Capital CAAS’s over 75 investments, 80% of founders were nonwhite and 30% were women, spread across twenty countries, statistics far above traditional industry numbers.[x],[xi]

The traditional venture capital model remains dominant in Silicon Valley and beyond. Yet, a range of players are pioneering new approaches. It is likely the next model for innovation will look nothing like its whaling forbearers.

[ii] Jean-François Caillard “Why is the Corporate Venture growing so fast? What are the keys?” October 27, 2017, accessed June 29, 2019 https://medium.com/@jfcaillard/why-is-the-corporate-venture-growing-so-fast-what-are-the-keys-b7cab8156b5e

[vi] Includes firms like Lighter Capital (an early pioneer of the model) in Seattle, Cypress Growth Capital in Dallas, and Decathlon in Park City Utah.

Startup Valuation – Why Not Listen to the Market?
Common Mistakes Entrepreneurs Make Pitching VCs
How to Make a Venture Capitalist Cringe - 7 Phrases to Remove From Your Pitch
Failure to Hold Your Partner Accountable Will Cost You Money and Credibility

Alex Lazarow has worked at the intersection of investing, innovation, and economic development across the public, private, and social sectors for more than a decade. He is a venture capitalist with Cathay Innovation and was previously with Omidyar Network. He is a Kauffman Fellow, Council on Foreign Relations term member, and an adjunct professor specializing in social-impact investment and entrepreneurship at the Middlebury Institute of International Studies at Monterey. A graduate of Harvard Business School and the University of Manitoba, he is the author of OUT-INNOVATE: How Global Entrepreneurs–from Delhi to Detroit–Are Rewriting the Rules of Silicon Valley.