You are here: Home / Startup & Funding Tips / What Every VC Should Know About Initial Coin Offerings 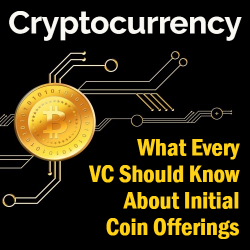 In the past few years, we’ve noticed tremendous growth in the cryptocurrency market and the number of companies and startups offering cryptocurrency and blockchain based products. This has opened up several opportunities for VCs.

In the past few months, there have also been a number of companies leveraging this growth by offering cryptocurrency based products such as exchange traded funds (ETF) tied to cryptocurrencies. Investment funds are also employing a variety of strategies such as purchasing the top 10 coins by market cap, only investing blockchain incubators or focusing on real estate investment trusts (REIT). We’ve found these to be great opportunities for investors looking to move into the crypto market.

The other opportunity VCs should be educated on is the trend of fundraising on the blockchain. We’re seeing more and more startups are using an initial coin offering (ICO) or token sale to raise capital and avoid many of the drawbacks of traditional fundraising. According to CoinMarketCap.com, there has already been over $3 billion raised through ICOs in 2017.

Before we dive too deeply into the specific benefits and challenges of fundraising on the blockchain, it’s important to understand the distinctions between some common crypto terms.

Notable Companies in the Blockchain Space

The opportunities offered by ICOs and the overall growth of the crypto market have given rise to many companies and startups offering products or services to support the market. There are a few notable companies we’ve had our eyes on:

Why Consider Fundraising on Blockchain

Whether your company is blockchain related or not, you can still benefit from the boom of blockchain startups by raising funds through your own ICO.

With the boom of the cryptocurrency market, we’ve seen much higher interest generated by ICOs than any other asset class, and 2017 has been a record year. The Bancor Foundation raised $153 million in 3 hours through their ICO. TenX raised $34 million in the first 7 MINUTES of theirs! Right now investors are very interested in startup ICOs.

An ICO also offers access to a much larger, global market than traditional fundraising options which may limit you. 90% of North American and European banks are exploring blockchain. Opening your opportunities to a global market of investors can really give your ICO legs. Despite the increased reach of an ICO, we’ve found they end up being a lower cost option as well.

The other thing many investors look for – which many traditional asset classes fail to offer – is liquidity. For example, real estate investors have always struggled with illiquidity premiums and the inability to exit investments for a number of years. By tokenizing your investment opportunity you can add liquidity to traditional asset classes and make them a much more valuable opportunity.

There are a few major challenges when raising funds through a blockchain. None of them should turn you away from the idea of an ICO, but they should all be considered and planned for early on in the process.

The cryptocurrency and blockchain markets are definitely in a state of rapid change. This can make the idea of fundraising on blockchain through an ICO seem like more of a challenge than it is worth. However, as a VC you know that just presents an even larger opportunity for those willing. There are as many as 5.8 million unique users using a cryptocurrency wallet and the cryptocurrency market cap sites at over $175 billion as of October 2017. That is definitely an opportunity worth seizing.

Kirill Bensonoff is a successful entrepreneur with multiple exists, blockchain investor, product manager at Kaseya and partner at Caviar, pioneering a dual-purpose token and crowdfunding platform built on the Ethereum blockchain. He bought his first Bitcoin in 2013 and has participated in dozens of token generating events. As a graduate from the Entrepreneurial Masters program at MIT, he has served as both an advisor and angel investor in over 20 different companies. Kirill is a member of Young Entrepreneur’s Council and co-hosts the Boston Crypto Meetup  series. He has been published or quoted in national business, blockchain and technology media, including Forbes, Inc., Huffington Post, Bitcoin Magazine and CoinTelegraph, among many others. Follow him on Twitter at @prankstr25.