Israel early-stage technology companies are at the epicenter of the ‘Startup Nation,’ yet hundreds of qualified companies are struggling to raise the growth capital they need to expand into the global market.

The ‘Startup Nation’ is experiencing unprecedented levels of investment growth, punctuated by exciting late-stage acquisitions of Israeli startup successes by American corporate behemoths.  In the third quarter of 2013, according to Forbes, 162 Israeli companies raised $660 million in capital from local and foreign investors – the highest total since 2000.  Practically daily, investors are bombarded by exciting exits: in August, IBM bought Israeli firm Trusteer for $800 million.  More recently, Facebook dipped into the market by buying Onavo for $100-150 million.  Indeed, some reports suggested part of Facebook’s motivation was losing out on the Waze exit, when the Israeli GPS company was sold to Google for $1 billion. 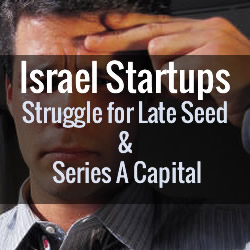 However, there is a clear hole in this trend; one you may have noticed.  If Israeli startups receive significant backing from domestic and Israeli venture capital firms and make it in large markets, they have a strong – perhaps even likely – chance of acquisition.  The problem is: Israel’s domestic venture capital community is quite small, with less than $10 billion in total under management, and only a couple dozen companies each year get the funding they need to roll out significant commercial products in foreign markets.

The solution to this ‘black hole:’ give more Israeli companies access to the large foreign markets, at an earlier stage of investment.

INE Ventures, which launched on November 27, seeks to do just that: co-investing at the late-seed level with Israeli partners and relocating Israeli portfolio company founders to its offices on the East Coast in New York and Philadelphia, where they will have access to a wide, local business development and investor network and subsidized, lower-cost housing, office space, visas, and other logistic necessities.

The combined net effect of earlier investment, lower costs, and an American partner on the ground gives companies rapid access to potential sales soon after finishing beta and launching commercial products.  For the company, this reduces their time to market, burn rate, and speeds up their initial sales and growth rates by a year or more and, for investors, this gives access to earlier-stage companies with sales in the market that nonetheless have significantly more opportunistic investment valuations.  For early stage U.S. angel investors and venture capitalists, who represent over $20 billion in available capital that is rarely accessed by Israeli companies, this is an opportunity to invest in a ‘Startup Nation’ that is typically open to U.S. investors only in later-rounds of investment.  New York investors, who are just beginning to see early-stage Israeli companies, and Philadelphia investors, who have a strong opportunity to create a vibrant early-stage technology center in the city with Israelis at its heart, should both benefit from these developments.

INE Ventures is not the only entity working to solve the Israeli venture capital black hole, there are also several other groups enriching the ecosystem.  Up West Labs, founded in 2011, brings Israeli concept-level companies to Silicon Valley and has seen strong interest from early-stage investors; with investments of over $800,000 in Up West graduates including Qlika, Preen.me, and Invi. The U.S. Israel Business Council (USI) and Eyal Bino’s Worldwide Investor Network have both helped early-stage Israeli companies meet East Coast investors this fall.  Indeed, several companies I advise, including Seebo, Datumate, and Graduway, and the winner of USI’s People’s Choice Award, Augury Systems, may receive significant capital investment in early 2014.

Yet, while exciting news, these successes represent a mere trickle of the strong Israeli technology companies, particularly in the Mobile, Software-as-a-Service, and Security investment sectors, that are qualified to receive the American-Israeli capital infusions of over $500,000 that they need to grow and take advantage of their primary sales markets.  In the coming year, as INE Ventures launches and more investors embrace the early investment and relocation model, it is our hope that dozens of new companies will escape Israel’s venture capital black hole.

Content Marketing for Startups ~ Do’s & Don’ts
What The Private Market For Late-Stage, Venture-Backed Companies Will Look Like In Five Years
The Current State of Early-Stage Investing
Four Ways Gender Diversity Improves Your Business

Paul is a managing partner at INE Ventures with expertise in mentoring seed-stage companies on marketing execution, strategic branding and public relations, and lean startup operations. Beyond his work with INE Ventures, he is also the Co-founder of Pervasive Group Inc., an investor and member of New York Angels, Jumpstart New Jersey, and the Delaware Crossing Investor Group. He holds an M.S. from Columbia University and a B.A. from Johns Hopkins University.