You are here: Home / Archives for Venture Debt 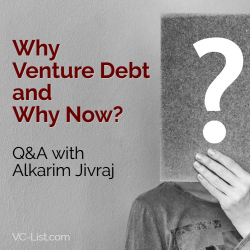 For founders looking for funding sources, venture debt is emerging as an alternative to traditional venture capital rounds. I recently interviewed Alkarim Jivraj, the CEO of Espresso Capital, to get the basics. Based in Toronto, Mr. Jivraj has been involved in technology investment banking, venture capital, and venture debt for over 20 years, during which period he has advised or invested in over 200 companies.

Alkarim Jivraj: Venture debt is exactly as it sounds: a term loan or line of credit used by startups and early-stage companies to fund their growth. Basically, venture debt is a less-known and less-utilized option for founders and CEOs of startup and early-stage companies to raise cash. The key distinguishing factor between venture debt and traditional venture capital is that with debt, founders and CEOs don’t have to give up control of their business to get the funding they need.

DH: How does it work?

AJ: In essence, venture debt functions similar to a bank loan, but it is available to startup companies that don’t necessarily have positive enough cash flow or significant assets to use as collateral to qualify for a more traditional bank loan.

DH: How does it differ from a bank loan?

AJ: Where banks may have a set-in-stone criteria used for qualifying borrowers, venture debt providers have the flexibility required to evaluate businesses on a case by case basis, looking at factors like the founders themselves, the product, and their go-to-market strategy. Unlike the banks, venture debt providers are able to look beyond simply the sales numbers to identify a future winner.

DH: How does it differ from a traditional venture capital investment?

AJ: When you give up an equity stake in your company, the more money you make, the more you have to give away to your investors. Using venture debt, you pay back what you borrowed plus interest – typically in the mid-teens – but in the long term, keep more of your hard-earned profits.

DH: How else does venture debt benefit founders?

AJ: As a general rule, companies tend to do better over the long term when founders maintain more ownership and control over their company. Venture debt allows entrepreneurs to retain this control and to grow their businesses without dilution, board seats, or personal guarantees.

Venture debt allows founders to retain both economic and strategic control over their company longer than if they were to fund with equity alone. When paired with private equity for seed A and B rounds, with venture debt comprising roughly one third of total funding for both rounds, pre-seed investors would retain an estimated 52 percent ownership versus 40 percent if the funding was comprised of equity alone.

DH: What are some common misperceptions people have about venture debt?

AJ: For first-time entrepreneurs, it can be easy to conflate views of venture debt with views about personal debt. They look at interest rates on credit card debt and see venture debt as the equivalent to living beyond your means and borrowing more than you can’t pay back. But, venture debt is essentially a replacement for equity which typically ends up costing two or three times as much in the long run.