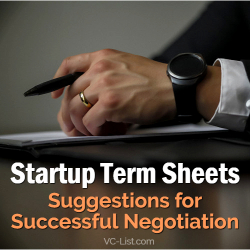 Early stage companies grow by attracting capital. Capital comes from investors, often referred to as venture capitalists (VC). VCs want control over their investment while founders want control of their company. And so the tug of war of an early stage investment negotiation begins.

A term sheet typically sets forth the terms and condition upon which a VC proposes to make an investment in an early stage company. The term sheet both initiates a formal negotiation and sets the tone for the future relationship between the parties. VCs are highly sophisticated investors who have tremendous experience investing in early stage companies and are savvy about the issues that are important to investors. For founders, it is essential to understand and carve out the issues that are most important to their own interests, so that any negotiation focuses on those issues, rather than every single point. Concentrating on the material issues also helps to build the founder’s credibility with the VC and close the investment swiftly.

Don’t Underestimate the Power of the Term Sheet

Even though a term sheet is not legally binding, it sets forth the initial agreement between the founders and the VC. If a founder agrees to a term in the term sheet, it will be very difficult to change that term in the definitive documents, and any material change will likely affect the founder’s credibility, which in turn may affect the relationship between the VC and the founder. Founders should be comfortable with the terms in the term sheet before they move on to final documents.

Understanding the typical provisions addressed in a term sheet before beginning a negotiation helps to focus a founder on the issues that are important. Not every issue is worth arguing about, and certainly not every argument is worth winning. Certain terms, however, are worth negotiating, and those usually center on control, valuation, liquidation preference, anti-dilution and veto rights. Founders should understand the meaning and impact of those terms.

The above provisions are merely a sampling of terms set forth in a term sheet that are worth negotiating early. There are, of course, other provisions that also end up in a term sheet, but it is best to determine which ones are worth the initial fight. Rather than focusing on terms that are relatively standard, such as rights to information or tag-along rights, a founder would be better off focusing on those terms that have greater significance.

Once founders are comfortable with the typical terms of a term sheet, it is easier to understand the perspective of the VC, which makes for a much easier negotiation. Once the founders appreciate the concerns of the VCs (anti-dilution, board representation and liquidation preference, to name a few), reaching a middle ground to address them results in a faster closing of the deal. Equally important is keeping in mind that founders and VCs are after the same thing: success. Coming to a compromise on important terms paves the path to a long and fruitful relationship.

Cash Is Not Always King

Naturally when looking for investment, founders look to maximize the amount of money they can get. However, it is important to look past the cash and evaluate the deal as a whole. Assess whether the investors can provide strategic advice, make introductions and offer mentoring and experience in the industry. While at the outset this may not appear to have monetary value, in the long run, such experience could be priceless. Finding the right long-term partner is the ultimate goal.

Crowdfunding Campaign Preparation
Is Your Startup Ready for Venture Capital?
Common IP Issues Facing Startups and How to Avoid Them
Bigger, Not Better -- When Less is More for Venture-Backed Startups