You are here: Home / Startup & Funding Tips / Startups May Soon Get Help From an Unexpected Source: The SEC 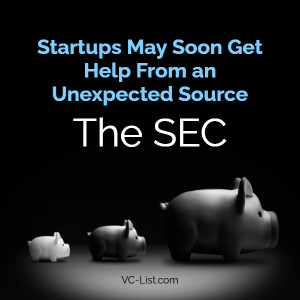 Many businesses have struggled to maintain adequate working capital throughout the Covid-19 pandemic, and startups are no exception. Although government stimulus packages have been implemented to help small businesses, most of these liquidity programs are geared to bridge payroll and overhead expenses, not provide the seed or growth capital typically sought by startups. With many early-stage ventures entering survival mode, the agency charged with policing the US securities markets, the Securities and Exchange Commission (SEC), may soon provide some relief.

For those unaware, any offer or sale of a security (a broad term that includes common stock, preferred stock, convertible notes and even simple agreements for future equity (SAFEs)) must be either publicly registered with the SEC or qualify for an exemption. Since the time and expense required to register an offering with the SEC make it unrealistic for most early-stagers, founders generally seek to raise capital in the private securities markets. While this may seem like a straight-forward endeavor, the rules governing a so-called “private placement” are complex and constraining, presenting thorny obstacles for startups during a challenging economic climate.

Recent proposals floated by the SEC, if adopted, could help.

In June 2019, about nine months before Covid-19 turned the US economy upside down, the SEC published a concept release soliciting input on how to harmonize the existing registration exemptions. In response to feedback on this release, the SEC has published two rule proposals. On December 18, 2019, the SEC proposed expanding the definition of “accredited investor,” the qualifying standard for participation in most exempt offerings. On March 4, 2020, with the US on the brink of the Covid-19 crisis, the SEC published a broader rule proposal, this one seeking to clarify and improve the utility of numerous existing exemptions.

Not everyone is in favor of the SEC’s rule proposals. During the public comment period, which officially expired on June 1, 2020, opponents included the North American Securities Administrators Association (NASAA), which criticized the ability of private companies to continuously amass investors through exempt offerings, thereby avoiding the transparency of a public company and increasing the risk of fraud. On June 25, 2020, Maxine Waters, Chair of the US House Committee on Financial Services, sent a missive to SEC Chair Jay Clayton—urging the agency to pump the brakes on the new rules. Most recently, on July 17, 2020 the US House Appropriations Committee introduced a proposed bill that would prohibit the SEC’s use of funds to finalize the March 2020 proposal unless the SEC first takes action on a prior proposal that would strengthen filing requirements for exempt offerings. Although this is just a proposed bill, the unusual restriction shows that there is significant opposition.

If the proposals are ultimately adopted, the next step would be for the SEC to publish a release disclosing the final rules and announcing their effective date. It’s anyone’s guess when that will occur, if at all. Assuming it does, here are some of the proposed changes that would be most helpful for startups.

Although the basic metrics for accredited investor status would remain unchanged (annual income exceeding $200,000 ($300,000 with spouse) or net worth exceeding $1 million, excluding primary residence), the SEC proposal would add several new categories to the definition, including: individuals holding certain certifications or credentials (such as a Series 7 license), family offices with at least $5 million under management, registered investment advisers, and rural business investment companies (RBICs).

The significance of these additions is grounded in the fact that an overwhelming number of private offerings are limited to accredited investors. The primary reason for this limitation is that SEC Rule 506(b), by far the most popular safe harbor exemption, contains a burdensome disclosure requirement that applies if any non-accredited investors are included in the applicable offering (up to 35 are permitted by Rule 506(b), provided they, or a representative retained in accord with the rule, are financially sophisticated). Coincidentally, the SEC’s March 4, 2020 proposal seeks to address the exclusion of non-accredited investors from Rule 506(b) offerings by eliminating the audited financial statement requirement for such deals that do not exceed $20 million.

Accredited investor status carries even more weight in an offering exempt under Rule 506(c), a separate safe harbor that, unlike Rule 506(b), permits a general solicitation (securities law lingo for advertising), so long as all purchasers are accredited investors.

Rule 506(b) and Rule 506(c) have no dollar limits, so the expansion of the accredited investor universe could ultimately result in more dollars being invested in these deals—a good thing for startups, especially since most founders are currently fixated on their runways.

The new accredited investor categories could also help startups planning an offering under Regulation Crowdfunding, the highly anticipated but so far underutilized exemption that was introduced by the JOBS Act. Currently, all investors (accredited and non-accredited) are subject to a 12-month dollar limit on the amount they can invest in Reg CF deals. The SEC’s proposed rules would eliminate the limit for accredited investors altogether, and they would also modify the formula applicable to non-accredited investors to effectively increase their 12-month cap.

Although Rule 506(b) and Rule 506(c) place no dollar limit on the total amount of the applicable securities offered, certain other registration exemptions do have a 12-month cap, and the SEC has proposed to increase some of them.

For Rule 504, a private company safe harbor exemption with no investor qualifications or specific disclosure requirements, the SEC has proposed to double the 12-month limit from $5 million to $10 million. The snag with Rule 504 is that, unlike Rule 506(b) and Rule 506(c), there is no preemption of state securities laws, meaning issuers need to confirm the availability of state exemption(s), or else register or qualify the offering in the applicable state(s), which could render Rule 504 unworkable as a federal exemption.

While the Rule 504 increase would provide an obvious direct benefit to startups by allowing them to raise up to $10 million from non-accredited investors every 12 months, there could also be an indirect benefit for startups considering a merger or business combination transaction.

An unsung benefit of Rule 504 is that it allows private acquiring companies to include stock in an acquisition deal without registering the “offering”, regardless of the number of non-accredited stockholders of the target and regardless of their financial sophistication, obviously subject to the 12-month dollar limit. The Rule 504 increase to $10 million would provide meaningful flexibility for the inclusion of stock in private M&A deals involving startups, which could stimulate transactions while companies look to preserve cash.

For Regulation Crowdfunding, the SEC has proposed to increase the 12-month limit almost five-fold, from $1.07 million to $5.0 million.

Again, since the startup runway is now front and center due to Covid-19, these increased offering limits, if adopted, would be an obvious upgrade for early-stage ventures.

In addition to the above, the SEC has also proposed to increase the 12-month limit under Regulation A – Tier 2, an exemption that requires public filings with the SEC, from $50 million to $75 million.

In the startup ecosystem, so-called demo days provide founders with an opportunity to showcase their products and services in front of prospective angel investors, seed funds and venture capital funds. Without guidance from the SEC, these events can cause heartburn for securities attorneys because, depending on the circumstances (such as the breadth/scope of the invitation and any communications regarding a securities offering), there could be an offer via general solicitation, which would forestall the availability of many private exemptions, including the ubiquitous Rule 506(b).

To help startups avoid this legal landmine, the SEC has proposed a rule that would prevent a demo day from crossing the general solicitation line if: (i) it is sponsored by certain qualified groups (such as angel investor groups, incubators, accelerators and non-profits), (ii) no securities offering is referenced in the event invitation and (iii) communications about a securities offering at the event are limited to (1) a statement that the startup is offering or planning to offer securities; (2) the type and amount of the securities and (3) the intended use of proceeds.

The safe harbor would also place restrictions on the event sponsors, including (A) no investment recommendations or advice; (B) no engagement in negotiations between any startup and investor; (C) no attendance fees other than reasonable administrative fees; and (D) no compensation for introductions, negotiations or any other activity that would require SEC registration as a broker-dealer or investment adviser.

In its proposing release, the SEC acknowledged that the demo day safe harbor would provide startups with the opportunity to grow their networks, a benefit bolstered by the blockbuster proposal to permit generic solicitations of interest.

Perhaps the most significant rule proposed would allow startups to “test-the-waters” by sending a generic solicitation communication to prospective investors in advance of a proposed securities offering.

Historically, the SEC has tried to muzzle issuers before the launch of a securities offering, on the theory that information should only be provided after all required disclosure is made available. However, this limitation has been relaxed through SEC rulemaking, and the proposals would now extend the exception to any startup contemplating a private placement.

The beauty of being able to test-the-waters is that the startup can gauge interest before pulling the proverbial trigger and incurring the expenses of launching an offering. Even better, under the proposed rule, there would be no restriction on the qualifications of the recipients, meaning moms, pops, kooky cousins and anyone else could be included. Importantly, if the communication is sent by means of a general solicitation, exemptions that prohibit such advertising (such as Rule 506(b)) would be unavailable.

Any testing-the-waters communication would require a cautionary legend stating: (1) the company is considering a private securities offering, but has not decided which exemption it will rely on; (2) no money is being solicited and none will be accepted; (3) no sales will be made or commitments to purchase accepted until the exemption is determined and all requirements are satisfied and (4) indications of interest are non-binding.

The combination of the demo day and generic solicitation of interest safe harbors could be a godsend for founders. Although not crystal clear from the SEC’s proposing release, it seems that founders would be permitted to expand their networks at demo day events, and then later ping these new contacts with a generic solicitation of interest, all within the boundaries of the SEC’s rules governing private offerings.

One potential pitfall on this proposed rule is that any testing-the-waters communication would be considered an offer for federal securities law purposes. This is significant for two reasons. First, there could be fraud liability for any false or misleading statements in the applicable communication. Second, since the SEC has indicated there would be no preemption of state securities laws with respect to this rule, state registration or qualification requirements could be triggered. As an example, in New York, subject to certain exceptions, issuers need to register as dealers in their own securities before making any offers in the Empire State. Absent state relief, New York issuers would have to register (or qualify for an exemption) before sending a generic solicitation of interest in New York. This burden could outweigh the benefit of gauging interest before incurring the expenses of launching an offering.

This post is for general informational purposes only and does not constitute legal advice. No one should rely on the information in this blog post without seeking appropriate legal, accounting, tax or other appropriate advice from an attorney, accountant or other professional properly licensed in the applicable jurisdiction(s).

Patrick T. McCloskey is the managing member of McCloskey Law PLLC, a boutique law practice in New York for business entities, owners and investors during the critical stages of formation, growth and exit. Mr. McCloskey’s areas of practice include early-stage securities transactions.