Many entrepreneurs hold the belief that the ultimate success or failure of their fledgling company rides only on the obvious factors; having a great team, disruptive technology, and advantageous market timing.  But the devil is in the details – and entrepreneurial ventures are full of details.  It is quite often the little things that create an avalanche of success, or failure. 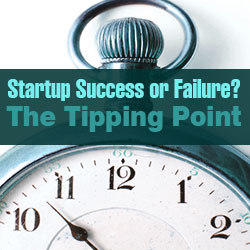 In Malcolm Gladwell’s book, The Tipping Point, the concept that small changes can lead to upheaval was presented.  Gladwell defines a “tipping point” as “the moment of critical mass, the threshold, the boiling point”. One example given was the reduction of crime in a neighborhood that started by fixing broken windows, which led to increased pride and solidarity between the community residents.

In a startup, this boiling point is a double-edged sword and has many complex components.  The escalation of events either leading to a positive IPO or acquisition begins many months before success is clear.  Likewise, events leading to failure can begin to drive towards critical mass even when all outside indicators are positive.

As an example, one startup that I joined during the seed stage garnered lots of Silicon Valley attention, yet never fully lived up to its promise.  On the Executive team were former Vice Presidents from a company that had been one of the top IPOs of the decade, as well as several PhDs from a renowned national engineering school.  Money poured into to the deal from top VC firms both in the US, and internationally.  All was looking up and the six of us who joined early started secretly shopping for  BMW M5s and Porsches.

Then small things began to happen.  The new CEO had personal issues and was distracted.  Some key engineers chose not to accept offers.  The website cost much more than anticipated.  The snowball had begun – and culminated in a one year product delay that could have been prevented if an engineering corner hadn’t been cut to try to meet an impossible schedule.

The VCs cut staff to reduce burn rate, and the company (which shall remain unnamed) was sold, unceremoniously, to a large multinational corporation for much less than it could have commanded if the technology had been introduced on time.

One of the biggest issues leading to the engineering mistakes was the environment, which was the end product of all the small issues that eroded morale.

The tipping point works in a positive way too, although statistics prove that most startups do end up tipping negatively.  An example of a successful startup was a customer of mine during the 90s – I saw the positive small steps move towards a successful product launch and eventual IPO as an observer rather than team member, but they were no less memorable to me.

The key technical team members had a complete “can-do” attitude. No problem was insurmountable.  The whole team spent time daydreaming about how their product would take the world by storm (which it did).   The key hardware guy worked out of his home in the company of one very friendly dog, whose warm nose and wagging tail added to the positive environment.  I counted him a member of the team.

The team communicated well with outside resources and told their story well.  At least in the early stages (before the company peaked and hit maturity in later years), Executive staff decisions were made well.  And issues were resolved very quickly, before they had time to start any negative avalanches.

The first company?   You would never remember its name, as it faded quietly into obscurity.   The second company?  Palm. Although the post IPO track record of the company became less than spectacular (mostly due to the dot Com bubble), no one can argue that the Palm Pilot wasn’t wildly successful as a product in the 90s.  The definition of success of a startup is a great IPO or acquisition – and Palm does qualify here.  The rest of the story post acquisition is more of a statement against the acquirers, than the company itself.   3COM and HP have both seen their tipping points come, and go.

US Investors in China's Tech Sector Must Navigate Through Uncertainty
Equity Crowdfunding: Legal or Not?
How Startups Can Raise Venture Capital in a Virtual World
Should We Be Practicing SAFE Investments?

Brenda's thirty+ years of Silicon Valley high tech service includes a wide variety of engineering, marketing, sales, and business development positions. Although she has held positions in large companies such as Hewlett-Packard, DEC, and currently Cisco Systems, she was hit with the start-up bug hard in the early 90s. Her start-up experience includes being either an active team member or consultant for over fifteen deals from seed stage to early IPO or acquisition. She joined Cisco Systems in 2010 to help with acquisition integration, and now is a Business Development Manager for Cisco's Advanced Services Collaboration group. She holds a BS Materials Science and Engineering from Northwestern University, an MSEE from Santa Clara University, and an MBA with a concentration in Finance from Edinburgh Business School.