You are here: Home / Industry News / Since When Doesn’t Profitability Matter? 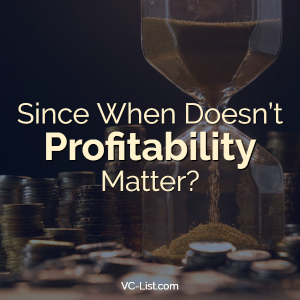 There’s certainly enough lack-of-profitability blame to go around. There are the GPs and LPs who fancy themselves as Las Vegas high-rollers who take the capital and “let it ride.” Why not? They are in the risk-taking business and they might have a $20 billion fund sitting there for the purpose of investing. And they’re certainly not looking to invest in Treasuries that have low risk and low return. “The road to profitability is clear as day,” they say. “How can it miss?”

CEOs (which could stand for Chief Evangelical Officer) for startups are often true believers that they have the next unicorn. Sure, they may have a great idea and a 30,000-foot vision, but do they have the organizational skills to hire, train and supervise as well has hold management accountable? Let’s just say it’s easier said than done when those key managers are your brother-in-law and college roommate. The problem may then become compounded by their temporary success. They are able to raise too much private capital too quickly, which incentivizes them to stay private that much longer.

The board of directors has some culpability, too. They often become so blinded by looking forward to that glorious IPO day when the CEO gets his or her photo-op ringing the bell at the NYSE. But, in actuality, they were enablers who should have spent more time reviewing the balance sheets, crunching the numbers, developing a long-term strategic plan, and calling the CEO on the carpet for a track record of red ink.

Take the case of WeWork. Its founder and CEO, Adam Neumann, is an entrepreneur who had tried his hand at the apparel market and then the children’s market—both to little success. Enter Softbank. This Japanese based bank has a presence in 37 U.S. cities and a lot of cash to invest, namely $100 billion. Softbank went all in on Neumann’s latest start-up: workspace services. However, WeWork was rife with conflicts of interest and poor managerial oversight, over-leveraged and—worst of all— hemorrhaging cash. By 2018, WeWork had lost $2 billion. And while IPO talk was rampant, profits were nowhere on the horizon. Eventually, Softbank (who, let’s not forget, was all in) had to recapitalize WeWork and wound up losing $40 billion. The IPO is on hold, Neumann has parachuted out, and layoffs loom for approximately 4,000 employees.

Who’s going to step up and be the adult in the room? It really falls on everyone involved to ask the right questions. But just what are those “right” questions? Here are a few that company leadership and investors should be asking to help establish a clear path to profitability and ROI:

Entrepreneurs and their teams need to obsessively develop accurate financial projections about what they can do for investors, how much capital they need to raise in subsequent rounds and how it will  be deployed, and what the long-term plan for growth is. It shouldn’t become rote for CEOs to present to the board and investors yet another hockey-stick sales curve chart where projected revenues start off slowly and then quickly explode with growth.

Another threat to keeping it real is overestimating the ability of the startup to scale quickly as demand increases. Managing growth is arguably the most difficult task in launching a business. Startups should plan and budget for research and development to stay ahead in their field and avoid disruption. The talent, equipment and facilities supporting research is expensive and needs to be accurately reflected in the company’s cash needs.

Entrepreneurs who are prepared for a due diligence review will have a complete overview of current expenses versus revenue and a conservative projection of how that will change in the first five years. Proposals that do not show a maximum amount of transparency, including all of the company’s financials presenting an accurate picture of how the company burns through cash, should also be a red flag.

Those three glorious letters. It’s a day for the whole team (underwriters, investors, the CEO, staff and the board) to pop open the champagne—moderately priced; you’re still a start-up after all. But again, it all gets back to profitability. Take Uber. The day it went public, it was trading at $45 per share. As of this writing, it is at $25. Why? Lack of profitability. Many IPOs face this problem because in pursuit of the next unicorn, the team took their eyes off the profitability ball. In fact, there’s a decent chance that their IPO value is less than prior private rounds. This trend actually holds frighteningly uncertain prospects for capital markets.

There’s an old adage in venture capital funding that “if you’re going to fail, fail quickly.” And while many VC investments do fail, if you do have strong corporate governance, deploy cash smartly, and have a realistic path to profitability, you’re in a much better position to pop the champagne—moderately priced, of course.

Alan Wink, Director – Capital Markets at EisnerAmper LLP, assists clients with capital budgeting, capital structuring and capital sourcing. Alan has 20 years of financial and consulting experience, having served as Director of the Interfunctional Management Consulting Program at Rutgers Graduate School of Management, a program he helped build into one of the largest business school-based management consulting practices in the country. He started his career in accounting, spending six years on the audit staff of a Big 4 accounting firm and a Fortune 500 Company. Alan left the accounting field to expand his horizons in the area of Corporate Finance. Alan spent several years as Director of Financial Analysis for AmBase Corporation (NYSE), where he led approximately $2 billion of corporate acquisition activity. He is also a past Vice President of Capricorn Management, a $100 million private equity fund specializing in restructuring and turnaround opportunities. In addition, Alan is a leader in the firm’s Technology Group, providing a variety of industry-specific services to technology and life sciences firms, including business and strategic planning, marketing and competitive analyses, financing assistance, and operational and financial benchmarking. He has worked with many early stage and emerging growth companies on developing the appropriate capital structure for their position in the business life cycle. He maintains an active contact base with angel investors, venture capital funds and private equity funds. Alan also understands the level of returns private investors are trying to realize and devises strategies that allow both entrepreneurs and their investors to achieve desired return thresholds.