You are here: Home / Startup & Funding Tips / Startups Gone Wrong: What Happens in a Liquidation and Who Gets Paid 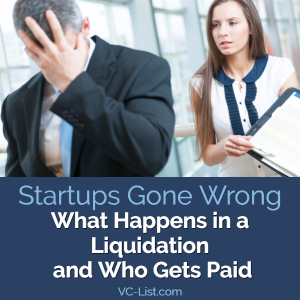 It has been reported that 75% of startups with money raised from venture capital funds go bankrupt.[i]  As one author stated “Venture capitalists who once considered it an unthinkable breach of decorum to put a company into bankruptcy now see it as a way to salvage what they can from their would -be unicorns”  [ii]

In the past, startup investors were reluctant to finance a troubled company beyond a certain point and were prone to walk away rather than attempt to salvage their investment. This all changed with the sale of patent portfolios by such high-profile companies like Nortel and Kodak.  Instead, investors took a more careful look at possible recoveries through asset sales or restructuring of the company’s balance sheet or a sale of the company to third parties.

So, what exactly happens when a startup fails and has to liquidate?

Financing of new ventures is usually provided in multiple stages beginning with a seed stage investment being made by either an angel investor or a venture capital fund.  Assuming that the idea/product is qualified for further investigation and/or investment the process proceeds to the next stage, the so- called startup stage. Here, a business plan is prepared, a management team is formed and a board of directors is constituted, often with a seat or seats being given to a person from the venture capital firm.  The following stage of financing occurs when the idea has been transformed into a product of service and is being produced and sold.  As the business further matures the venture seeks to expand market share and the investors will seek to evaluate costs, growth opportunities and related matters. The last stage in the investment cycle is the bridge, pre-IPO stage, the goal being for the venture to go public so that investors can exit the venture with a profit commensurate with the risk they have taken.

Claims and Interests Arising During the Startup Cycle

Investors in startup ventures typically receive common stock in the venture although the means by which this is done can vary either through (i) a convertible promissory note, (ii) a simple agreement for future equity, or (iii) a convertible preferred stock investment. Convertible debt, if used, has both debt and equity characteristics and may create some interesting issues in connection with distributions in a bankruptcy case as will be discussed below.

And, in some cases, financing may be secured by collateral including soft assets like intellectual property or hard assets like inventory, accounts receivable, machinery and equipment, and even real estate. At the same time the venture typically will incur unsecured trade debt in the form of rent, payroll, material supplies, machinery and equipment leases, insurance, and other similar costs and operating expenses. Finally, the company may obtain secured loans as a form of financing. The key question is what happens to these debt and equity claims when the startup fails and has to liquidate in a bankruptcy proceeding.  Who gets paid and from what sources? The answers lie in various provisions in the Bankruptcy Code.

The Bankruptcy Code establishes the following priorities with respect to a Chapter 7 liquidation or distribution to creditors and equity interests under a Chapter 11 liquidating a plan of reorganization:

All asset sales under the Bankruptcy Code outside the ordinary course of business require bankruptcy court approval under Section 363 of the Bankruptcy Code. Typically, the debtor must show that it has obtained the highest and best bid for its assets through an auction process.  In most cases, the debtor will obtain approval in advance of bid procedures, often with a stalking horse bidder already selected.  When a stalking horse is used, the bid procedures approved by the court in advance will typically include a break-up fee and expense reimbursement if a higher and better bid is obtained in the sale process.  This process typically takes between 90 and 180 days.

Administrative claims arise in connection with administration of a bankruptcy estate and generally include ordinary course of business payments incurred and payable during the post-petition period such as real property lease obligations, wages and salaries, taxes and professional fees.

Priority unsecured claims generally consist of unpaid pre-petition obligations for taxes, wages, contributions to employee benefit plans and certain other claims set forth in Section 507 of the Bankruptcy Code.  The Bankruptcy Code sets forth certain time and amount limitations on how the claim priority will be determined.

General unsecured claims consist of all unpaid pre-petition claims that are not secured or priority claims. Typical unsecured claims consist of claims held by trade vendors, landlords, taxing or other governmental authorities, employees, and any deficiency claims held by secured lenders or debtholders, the latter holding claims that may be underwater. The holders of convertible or subordinated debt may also be included among unsecured creditors, but the treatment of these type of claims can be complicated by the terms and conditions of intercreditor agreements and disputes over the valuation of the debtor’s assets.

Ideally, investors infusing debt capital into a company want to be sure that the infusion is treated as a loan as opposed to an equity investment.  Bankruptcy courts may be asked to recharacterize certain loans as equity interests, resulting in the total subordination of the investor’s claim to all other obligations of the company.  Recharacterization involves a determination of whether a debt actually exists, and requires no finding of inequitable conduct.  Capital infusions by insiders are particularly vulnerable to recharacterization attacks because of their unique relationship to the company. The chance of an otherwise valid loan being recharacterized can be minimized by carefully structuring the cash infusion by properly documenting, effecting and implementing the transaction.

By way of example, the issuance of a bond, debenture, note or the existence of a lien securing the advance is indicative of a loan, whereas the issuance of a stock certificate in exchange for the cash infusion will more likely result in the advance being deemed an equity contribution.  The presence of a fixed maturity date, fixed interest rate and a fixed schedule for payments are also characteristic of debt obligations as opposed to equity.  Inadequate capitalization of the company is strong evidence of a capital contribution.  The determination of undercapitalization is highly factual and may vary substantially by industry and company.  Additionally, if the company is unable to borrow funds from other lending institutions at the time the cash infusion is made, the transaction is more likely to be deemed an equity interest.  Stated differently, the more aspects of an arm’s length loan transaction the better.

However, even non-insider loans can be rechacterized as equity contributions. Some of the criteria considered by courts in the non-insider situations include whether the relationship between a debtor and a creditor is sufficiently close to suggest that transactions were not conducted at arm’s length.  If there is a close relationship the creditor may be considered a non-statutory insider. However, mere participation or influence may not be sufficient even if it includes a seat on a debtor’s governing body. Similarly, the mere participation by subsidiaries in lending and equity relationships with the debtor is insufficient without more to make the lending subsidiary an insider, even if it has a director on the debtor’s board. These issues are very fact sensitive and unfortunately fertile ground for litigation.

As a final word on payments during a liquidation it should be noted that the so-called absolute priority rule ensures a fair distribution of the debtor’s assets by mandating that claims of higher priority are paid in full before claims and interests of lower priority may participate in any recovery. That said, the ranking of claims and interests may be modified if creditors or equity interest holder creditors agree to a different treatment. For example, a senior class of claims or interests may agree to allow a junior class to receive a distribution or larger pro rata distribution in order to facilitate confirmation of a plan of reorganization.

Administration of the Bankruptcy Estate

Individual creditors and equity holders play a limited role in a liquidation under either Chapter 11 or Chapter 7 of the Bankruptcy Code. In a Chapter 11 case, a creditors’ committee (and sometimes an equity committee) is appointed and hires professionals to generally represent the interests of creditors or equity holders. Of course, individual creditors and equity holders can hire counsel and participate in bankruptcy cases in connection with issues affecting their particular interests, but the committees typically will take the lead on most issues.

During the bankruptcy case the board of directors continues to meet regularly and continues to be responsible for the company’s strategic decisions. However, any of its decisions regarding actions outside the ordinary course of business will be subject to the approval of the bankruptcy court.

Investing in or providing financing to startups is risky and the liquidation process of the company and distribution of the enterprise value can be challenging because of the treatment of claims and interests under the Bankruptcy Code. That said, investors have learned that rather than abandoning their claims and walking way, there are ways to potentially recover the value of one’s investment provided that you have a good understanding about the liquidation process.

Think Creatively About Early-Stage Capital
Bigger, Not Better -- When Less is More for Venture-Backed Startups
If You Are In Business with Others, You Should Have A Good ‘Prenup’ In Place
Key Legal Agreements for Technology Startups

Robert W. Dremluk is a partner in the New York office of Culhane Meadows PLLC. His work focuses on diverse interests in federal and bankruptcy court litigation, and advice and risk assessment regarding transactional matters, including asset purchases and structured finance transactions. He may be reached at rdremluk@cm.law