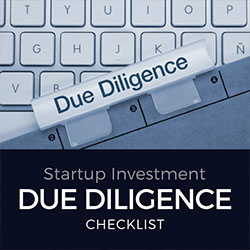 Here is a standard two-part list of company information that most institutional investors would look for during the due diligence process. It is an extensive list but not exhaustive and all applicable depending on the company. Founders & management team should consider preparing and organizing themselves with the below to make the process as smooth as possible.

Copies and details (and to the extent oral, written summaries) of all material contracts and all capital commitments of the Company, including without limitation:

For the last three years and the current YTD period, provide the following:

Prepaid Expenses and Other Assets

Vincent Lui is the Managing Director of Rhapsody Ventures. He has over 15 years of entrepreneurial & operating experience and broad domain knowledge in network infrastructure technologies. Prior to forming Rhapsody Ventures, Vincent was VP of Strategy & Corporate Business Development at VSS Monitoring, and wore multiple other hats – including business development, technology alliances, corporate marketing and venture financing ($20M by Battery Ventures in 2010) – resulted in over 50% year-over-year growth during his tenure. Vincent was instrumental to the acquisition of VSS in 2012 by Danaher Corporation (NYSE: DHR), a $60 billion Fortune 150 company. Post acquisition, Vincent led strategic planning efforts and helped coordinated the implementation of Danaher Business Systems. Vincent began his career at Lucent Technologies (Alcatel-Lucent/Nokia), and later took on key roles in a number of startups including homeFiber (later became Broadand Rhapsody), Photonic Power Systems (acquired by JDSU, now Viavi), Cleanpoint and Display Photonics. In 2006, he joined KLM Capital, a US-China earlystage venture fund, responsible for investment due diligence and portfolio management.  He was board observer for portfolio companies including Auvitek (acquired by Microtune, now CSR), Opulan (acquired by Atheros, now Qualcomm), and Novera Optics (acquired by LG-Nortel, now Ericsson). In addition to Rhapsody Ventures, Vincent currently advises and invests in several early stage companies including Saisei Networks, Flying Cloud, Skalera, Creanord, Symbid and iFunding.  Vincent holds a B.S. in Electrical & Computer Engineering and B.A. in Music from UC San Diego, M.S. in Management Science & Engineering from Stanford University, and studied in the Doctorate of Business Administration at Newcastle University and Grenoble Ecole de Management.