You are here: Home / Industry News / Startup Deals with Big Companies Are on the Rise. Here’s What That Means for Entrepreneurs. 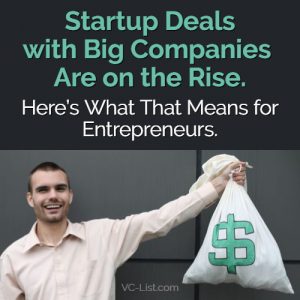 It’s a great time to be an entrepreneur. With corporate profits high and cash freed up by the 2017 Tax Cuts and Job Act along with a robust economy, investors are hungry for good deals.

So with the right idea and a solid strategy to go to market, startup CEOs in a range of sectors—from technology and pharma to food—should have little trouble getting an audience not only with the early seed angel investors and venture firms, but with savvy portfolio managers from a growing percentage of America’s top companies.

Last year, corporate venture capital (CVC) funding increased about 47% over 2017, while deals increased 32% over the same period, according to a report by CB Insights. There were a record 757 deals and $14.1 billion in funding in the second quarter alone. In the U.S., activity jumped 11%, to $26.5 billion in 1,046 deals. The report cited the top five most active CVCs: Google Ventures, Salesforce Ventures, Intel Capital, Baidu Ventures and Legend Capital.

At the same time, startup valuations are on the rise, with median pre-money valuation for seed rounds jumping from $5 million to $7 million, according to one estimate.  Bobby Franklin, president and CEO of the National Venture Capital Association, said in a statement in January that “heightened activity from corporate and private equity investors” contributed to ”an exceptional 2018 for the venture industry.”

CVCs may have a range of strategic goals in mind for this activity including accessing new technology that allows them to build new revenue streams, access to proven research and talent, or even blocking a fast-growing company from disrupting their business. As one analyst put it, “It’s the ability to see the future of your industry before it happens.”

Mark Zuckerberg,  CEO of Facebook, which helps launch budding application developers through its investment arm, once declared that “if we don’t create the thing that kills Facebook, someone else will.”

But these investors know that it’s not straight profit, but a business of thirds: One third of investments are generally going to be written off, another third are likely to return only the capital and, hopefully, a third will bring about 10x or 20x on the investment.

The great news for entrepreneurs is that corporate investors are often at the table alongside traditional venture capital investors. If presentation skills, confidence, imagination and innovation, (and a fair amount of good luck) align, a startup CEO can gain far more than just a check. It can lead to new global connections and sales channels, process and technology support and, not least, the option of a significant buyout that can finance the next great idea.

Securing a relationship with a CVC is a major coup for a startup. Though the money is important, so is the prestige of getting on the radar of a Samsung, Amazon, or Citi. This vote of confidence far outweighs the value add of a traditional VC, which is not to dismiss the importance of those early believers who often pave the way.

And far from being competitive, CVCs and VCs are most often glad to be sitting at the same table. Shared investment helps minimize risk.

There is no particular secret to attracting this capital. We advise clients to look for introductions from trusted contacts, including lawyers, a VC firm that often partners with CVCs, or incubator/accelerator programs. When discussions begin, due diligence is always key, and the conversation should focus on how your product or service is disruptive and aligns with the corporation’s core mission.

But be confident that a CVC arm will take the long view. After all, whereas a VC firm will spend every five years replenishing depleted funds, a CVC does not have that concern hanging over its head. There’s no need to report back to limited partners in terms of return on their investment.

They spend their own money to buy a stake in a promising, potentially disruptive technology, process or service, which is a much more patient, far-sighted approach.

Alan Wink, Director – Capital Markets at EisnerAmper LLP, assists clients with capital budgeting, capital structuring and capital sourcing. Alan has 20 years of financial and consulting experience, having served as Director of the Interfunctional Management Consulting Program at Rutgers Graduate School of Management, a program he helped build into one of the largest business school-based management consulting practices in the country. He started his career in accounting, spending six years on the audit staff of a Big 4 accounting firm and a Fortune 500 Company. Alan left the accounting field to expand his horizons in the area of Corporate Finance. Alan spent several years as Director of Financial Analysis for AmBase Corporation (NYSE), where he led approximately $2 billion of corporate acquisition activity. He is also a past Vice President of Capricorn Management, a $100 million private equity fund specializing in restructuring and turnaround opportunities. In addition, Alan is a leader in the firm’s Technology Group, providing a variety of industry-specific services to technology and life sciences firms, including business and strategic planning, marketing and competitive analyses, financing assistance, and operational and financial benchmarking. He has worked with many early stage and emerging growth companies on developing the appropriate capital structure for their position in the business life cycle. He maintains an active contact base with angel investors, venture capital funds and private equity funds. Alan also understands the level of returns private investors are trying to realize and devises strategies that allow both entrepreneurs and their investors to achieve desired return thresholds.