Forming a Corporation or LLC

A corporation is formed by filing articles of incorporation, also called a certificate of incorporation or a charter, with the Secretary of State of the jurisdiction in which you want to form the corporation.  Typically, the corporate law of that state requires certain information be included in the charter; e.g., the corporation’s name and the authorized stock.  Other information is permissive; e.g., any provision regarding the management of the company or any permissible changes to the statutory defaults. 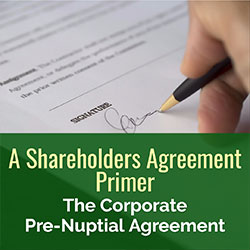 In addition to the charter, a corporation will regulate the conduct of its affairs or the rights and powers of its stockholders, directors and officers in its bylaws.  The main difference between the charter and the bylaws is that typically a charter may be amended by the stockholders only with predicate board approval while bylaws may be amended by stockholders without board approval.  Thus, any provisions that you don’t want stockholders to amend should be included in the charter.  Finally, state corporate law may provide additional governance requirements; e.g., the vote necessary to complete a merger.  State law, the charter and bylaws together constitute the contract of the stockholders regarding the governance of the corporation.   In some cases, particularly with private companies, stockholders may enter into an agreement that governs their rights as among themselves.

Similarly, an LLC is formed by filing a certificate of formation, which is where the similarity to a corporation typically ends.  Where the charter may be robust in its governance provisions so that it cannot be amended by the stockholders without board approval, a certificate of formation typically provides only the bare minimum required—the LLC’s name and address.  The real meat is in the operating agreement, which acts in some ways like a corporation’s bylaws but can be more properly thought of as a shareholders agreement among the LLC’s members.

In short, whereas a corporation will have a charter and bylaws and possibly a shareholders agreement, an LLC will have a certificate of formation and an operating agreement.

Typical Provisions in a Shareholders Agreement

The business and affairs of both corporations and LLCs are managed under the direction of a board of directors or managers.[2]  Given this ultimate authority, it is not surprising that shareholders, especially any minority shareholders, want a voice in how the board is comprised.  Otherwise—in the case of corporations anyway, where directors are typically elected by a plurality vote—a minority shareholder would never achieve board representation.

A typical board governance provision will delineate how many directors will be on the board and how many directors any particular shareholder or group of shareholders may nominate or appoint.[3]  In some cases, the agreement may provide that the shareholders must agree on one or more independent directors; i.e., someone who is not affiliated with any shareholder.  Thus, for example, a board may consist of one director appointed by one shareholder, another appointed by the other shareholder, and an independent director to break any stalemates.  Sometimes, however, if one shareholder has significantly more stock than the others, it will be able to appoint a majority of the board.  In that case, unless the minority has obtained any veto rights, discussed below, that shareholder simply has a voice in the boardroom, but no real power.

Probably the most common problem that arises in the board governance provision is that it allows the shareholders to appoint equal numbers of directors with no mechanism to solve any stalemates.  Most corporate statutes will not solve this problem for shareholders, who then end up in a hopeless impasse, and likely litigation.  A well-crafted governance provision should avoid this result, or at least provide for an orderly dissolution of the company or buyout of one shareholder by the other to solve or force a resolution.[4]

In addition, some corporate actions that already require shareholder approval, e.g., selling substantially all of the company’s assets or a merger, may require a supermajority vote that can be obtained only if some portion of the minority shareholders approve.

Usually with closely held companies—companies that would typically be formed as an LLC or where the shareholders would enter into a shareholders agreement—the shareholders want to control who their partners are.  In particular, they don’t want another shareholder to be able to sell their interest in the company to someone who could become a trouble maker. These types of companies also tend to have illiquid stock.  No public market exists to sell the stock of such companies, and any sales would occur only pursuant to privately negotiated transactions.

Third, what value is paid for the equity?  In a right triggered by an offer to a third party, the price offered by the third party usually controls.  The price to be paid is often an issue in the put/call scenarios.  Some agreements provide that the board has the right to determine the fair market value of the equity.  Of course, a board determination would be problematic in a situation where the company is exercising a call right.  Some provisions allow for the parties to hire an appraisal firm to determine the fair market value.  Other issues in calculating value include whether the appraisal firm can or should apply a minority or a liquidity discount in arriving at the market value.

Many of these issues will come down to who has the leverage at the time of negotiations.

Another minority protection is the ability of shareholders to maintain their proportionate interest in the company should the board issue new equity.  In short, this right allows the shareholder to buy additional equity at the price offered to other shareholders or third parties.  Typically, this right will not apply with equity compensation grants to employees or an underwritten public offering.  This right may or may not be granted in situations where the shareholder has the right to veto the board’s ability to issue new equity.

Shareholders agreements serve a valuable function in closely held and private companies.  Ideally, people who go into business together will always agree on how to run that company both on a day-to-day basis and as significant events present themselves.  Similarly, one can hope that all shareholders will agree and be fair with one another when one of them wants to sell.  History proves that many times this does not happen, even among family members.  While a well-crafted shareholders agreement cannot prevent the bad blood that sometimes arises between shareholders, it can at least help them manage difficult situations and, if needed, provide for an orderly divorce.

[2] An LLC may sometimes be managed by a single member, called the managing member, in which case this discussion would not apply. Where there are multiple third-party members, however, it is more typical for the LLC to be governed by a board of managers.  Again, for simplicity, I will refer to the members of a board as directors.

[4] In one particularly noteworthy situation, in 2015, Chancellor Andre Bouchard ordered a custodian to oversee the sale of TransPerfect because the shareholders, who effectively each own 50% of the outstanding stock, who had no shareholders agreement and who were once engaged to be married, were hopelessly deadlocked.  Chancellor Bouchard’s order was recently upheld by the Delaware Supreme Court.  In another case making its way through the Ohio courts, a brother and sister who each own 50% of Dayton Heidelberg Distribution Co., and who do have a shareholders agreement that is not well drafted, are currently litigating control of that company.

A New Entrepreneurial Capital City? Early Stage Investors Flock South This Summer
Key Legal Agreements for Technology Startups
What You Should Know Before Building a Startup Advisory Board
Hiring the Right Startup Lawyer

Christopher J. Hewitt is a partner and chair of the Tucker Ellis LLP M&A and Corporate Governance practices. He represents public and sophisticated private companies in mergers and acquisitions, takeover preparedness and defense, proxy contents and corporate governance. He also represents investment banks in their capacity as financial advisers to acquirers and targets in public mergers. He can be reached at christopher.hewitt@tuckerellis.com.