You are here: Home / Industry News / With Security Tokens, VCs Finally Have a Blockchain Technology They Can Be Confident In 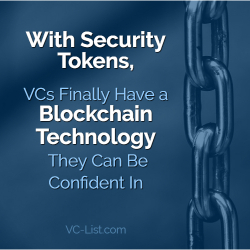 2018 was a tough year for initial coin offerings (ICOs). CoinTelegraph, a blockchain news and analysis outlet, reports that ICOs raised a combined $11.7 billion in 2018, which is 13 percent more than they did in 2017. But just as the cryptocurrency market very rapidly collapsed in early 2018, ICOs quickly lost their momentum in the second half of the year, leading former hedge fund manager and noted cryptocurrency champion Michael Novogratz to call the ICO market “pretty much dead.”

This shouldn’t be taken as evidence that investors have lost interest in blockchain technologies, however. Far from it, the decline of the ICOs is almost certainly the result of a new, arguably better, blockchain technology: the security token offering (STOs).

Unlike ICOs, STOs give investors ownership over a real asset, such as a percentage of a company’s equity or real estate asset. Since the ownership of a security token has intrinsic value, investors can be relatively certain that the coin won’t become worthless overnight.

In practice, STOs usually give investors access to a share of a company, a monthly dividend or a voice in the decision-making process. Additionally, STOs, like traditional securities, must be registered with the U.S. Securities and Exchange Commission or other respective regulators, which is an attractive feature to investors burned in one of the 80 percent of 2017 ICOs that were probably scams.

With all that going for them, it’s easy to see why there’s so much excitement surrounding STOs, particularly in the VC community. One of the reasons that ICOs were so popular in the first place was that it meant all entrepreneurs needed to have to raise money was an idea. Even without any tangible product, anyone could raise the money they needed to build their business without going to the bank for a loan and without diluting their control over the company. This brought in some much needed diversity to the investing community from a cohort of people who have been traditionally left out of investing markets.

The problem with this arrangement, however, was that the people buying the coins were basically speculators who had no interest in the company or product. Like Bitcoin and other cryptocurrencies before them, ICOs attached to specific companies or products attracted people banking on there being “someone dumber than them [to] buy their tokens for more than they paid for it,” as Wired’s Joi Ito puts it. So it’s no surprise that VCs have stayed away from ICOs thus far.

But the ICO market was also not so great for the businesses issuing the coins, either. While it’s true, in theory, that anyone could raise money for any idea, getting ICO investment was never as easy as some crypto-cheerleaders made it seem. Even in the second quarter of 2018 — which turned out to be the height of the ICO — only 7 percent of ICOs secured listings, and 55 percent failed to reach their funding targets. Worse, the utility token market seemed indifferent about what it was actually investing in. For instance, whether or not the entity issuing the coin was a working business — surely something a responsible coin investor would take into consideration — had no predictive power regarding whether the fundraising would be a success.

With the introduction of the STO, that’s all changing. Perhaps the biggest benefit of STOs over ICOs, at least from the perspective of raising capital, is that they’re likely to attract many more investors than ICOs ever did. Traditional investors are much more likely to invest in SEC-regulated security tokens than the unregulated wild West of a market that ICOs inhabit. At the same time, STOs should also attract crypto investors, many of whom tend to not invest in traditional securities.

Fair enough, you might say, but if security tokens and STOs so strongly resemble stocks and initial public offerings, respectively, why should companies offer STOs in the first place? The answer is simple: the Blockchain. Tokenization of securities brings many of the same benefits as cryptocurrency, including faster processing, increased liquidity, more efficient transactions and automatic compliance. Additionally, security tokens could make listing a company less expensive than the traditional IPO allows for.

There’s no question that the introduction of the ICO was an inflection point in the history of investing. Now, STOs have the potential to fulfill the promise of ICOs to make the investment market more secure, efficient and transparent.

VC Investing Needs More Skin in the Game
A Look Ahead at Venture Capital in 2016
Using Bitcoin as a Currency
The Great Expansion of Venture Capital: A Ten-Year Progression

Mark Li is a partner in BPM's Assurance Practice. With over 15 years’ experience in public accounting, he leads and serves BPM’s Blockchain and Digital Assets Industry Group, overseeing activities including but not limited to exchanges, wallets and custodians, crypto funds, STOs and stablecoins.