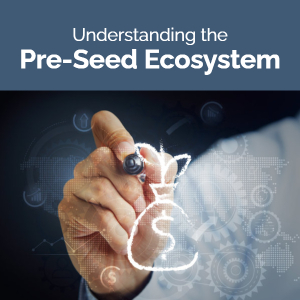 As a founder or early-stage investor, you have probably heard the term pre-seed being tossed around. But what constitutes an official round before the seed stage and why is the pre-seed so important now? In this article, we will delve into what exactly the pre-seed stage is, the top VC firms, accelerators, and angels for this stage, and finally some resources for founders looking to raise capital for this stage.

So what qualifies a company and/or round to be considered ‘pre-seed?’ According to Crunchbase: “A Pre-Seed round is a pre-institutional seed round that either has no institutional investors or is a very low amount, often below $150k.” It is the round after the ‘angel’ round and before the ‘seed’ stage. In reality, most define pre-seed to be after a friends/family/angels round, and before ‘seed’ of course, with a company typically having achieved an MVP (minimum viable product) but yet to establish firm market validation or product-market fit (all the better if they have though). Some other common characteristics:

Of course, there is no one size fits all for pre-seed. It is more about how early a founder wants/needs to raise capital and the risk that investors are willing to take.

What can explain the growth of the pre-seed stage though over the past 5 years or so? Really it has to do with investors being able to receive such a high multiple on their initial investment when a company is successful. VC returns are not a normal distribution, but rather a power-law distribution.

Why is this important? This is important for investors to understand as they search for the rare winners in this fat-tail, but also founders. If founders can better understand how investors look for and evaluate companies based on this distribution, they can better position themselves to raise VC money and hopefully build a successful business. In looking to understand why the concept of the fat-tail matters so much to VCs, this article writes about how most investments return very little or lose money, some return a multiple on initial investment, but it is the very small handful of “hyper performers” that return an outcome well outside what could be expected in a normal distribution. These few start-ups more than compensate for a fund’s losses, while also generating most of a portfolio’s returns. The last point explains the idea of ‘fat tails’ –  as the tails have more bulk, the probability of extreme events is higher compared to the normal. While these ‘hyper performers’ are rare, the lower valuations for these companies at the pre-seed level present an exceptional opportunity for investors if they are able to identify these companies at a higher rate than average.

Besides the power-law distribution to help explain the growth of the pre-seed round, NextView believes that there are two main factors that have contributed to the rise of pre-seed rounds: “the frothy late-stage financing market, coupled with both the scaling-up of some of the early winners in the institutional seed ecosystem and the scaling-down of some larger funds that retrenched after the financial crisis.” The fact that the late-stage financing market for tech companies has been typically over-funded with valuations/multiples that seem completely ludicrous over the past 10 years has incentivized investors to invest earlier, as they recognize this same trend. If a company is able to make it to a Series C, the pre-seed investors will have already have a 10-100X multiple in unrealized gains that will soon grow further with the frothy late-stage markets and the hopes of an IPO or acquisition. Finally, some of the first early-stage investors and VC firms have realized the returns on their first and second wave of winners and have been able to grow considerably with more institutional investors flooding in to generate alpha.

Let’s take a closer look at some of these top pre-seed VC firms and some of the criteria that they look for in companies, founders, and some resources to contact them and reach out if you feel you fit their thesis. Here are 5 of the top VC firms that focus almost exclusively on the pre-seed round:

The table above provides some more information on these VC firms including a tier ranking, website, contact info, number of investments, and some notable winners from their portfolio.

Obviously, there are many more VC firms that invest in the pre-seed stage, but the ones highlighted are heavily focused here and have a strong track-record. This list provides a look at over 750 seed stage funds and could prove extremely useful in your search for your first round of VC funding. Next we will take a look at the role that accelerators take at this stage and some of the top ones.

Accelerators/incubators are unique in the start-up ecosystem in the sense that they are more hands-on than a VC firm, but only for a selected duration of time. Almost all focus on the earliest of stages, and therefore if you are a pre-seed company should be a perfect fit for any accelerator. These incubators/accelerators will typically take a minority stake in a company and in return provide support in the form of: formalizing your goals/vision, market sizing, product development, branding, finance/accounting, legal, fundraising and introductions to angels and VCs, team building, sales strategy, communication/presentation skills, and other training programs and aid. Each accelerator really differs in their approach and the nature of their aid in the process but there have been countless successful startups to come out of accelerators and it’s fantastic for first time founders. There is also the venture studio which is like an accelerator where companies are incubated inside of the studio and you have multiple people working on multiple companies at a time. The successful ideas are spun out of the studio. With this information at hand, let’s take a look at some of the top accelerators, incubators, and venture studios:

The table above again provides some more detailed information on these incubators including their average check size, application link, and some notable companies they have invested in. Again, there are thousands of accelerators and incubators across the globe and this website does a fantastic job of breaking down over 500 of them.

What are some key things investors are looking for at this stage? Because traction is so limited, many qualitative factors must be considered. Five of the most important are:

The risk at the pre-seed level is the highest in an asset class that is already known to be the riskiest. Hence, investors are looking for exceptional returns on these early stage bets and the 99% percentile in the categories listed above. VC is a numbers game and investors see thousands of deals a year and pass on almost every single one (so don’t take it personally if you’re business is passed on by a VC).

In conclusion, we have learned that Pre-Seed can generally be defined as a pre-institutional seed round with prior capital raised often below $150k” It is the round after the ‘angel’ round and before the ‘seed’ stage. Companies have generally yet to establish firm market validation or product-market fit but some sort of minimum viable product (MVP).

Hopefully this article was useful in providing some insight into what exactly pre-seed means, why it is rising, and some of the top VC firms and accelerators at this stage. If you are a first-time founder or just want to learn more about the VC space, I highly recommend listening to the first 10 episodes of the first-ever VC podcast called The Full Ratchet. Nick Moran helps to break down the blackbox of VC and give founders a better idea of the funding process and what investors are generally looking for at this stage. The episodes can be found here.

If you have any questions, comments or useful tips about pre-seed investing and the process of raising capital or any interesting start-ups please feel free to comment below!!

Tax Consequences when Exercising Stock Options
Failure to Hold Your Partner Accountable Will Cost You Money and Credibility
How Venture Capital Is Changing to Adapt to the Global Innovation Landscape
Understanding What You Are Giving to Your Startup Accelerators: They May be More Expensive Than You ...

Jonathan Kendall is a senior at UC Berkeley majoring in Interdisciplinary Studies with a focus in Financial Strategy & Business Valuation and a minor in Philosophy. His passions lie at the intersection of entrepreneurship, social impact & investing. Working for New Stack Ventures as a Fellow, he sources great companies in under-capitalized markets and focuses on the pre-seed stage. Connect with Jonathan on LinkedIn, Medium or Twitter.