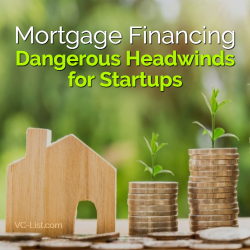 Entrepreneurs are optimists. They have to be. Just think about it. The 50 percent five-year failure rate for startups has been fairly consistent over the past decade. Most fail because their financial buffer is inadequate. Profits are too small, profit growth is too slow, or an unexpected contingency derails the startup’s business plan. If entrepreneurs were realistic in the face of these odds, we would have far fewer startups.

However, when it comes to that aforementioned capital buffer, entrepreneurs’ confidence needs to be tempered. While they can ignore the 50 percent failure rate, what they should be a little more concerned is some other factors from the “odds” list. In particular, the numbers related to mortgage financing and divorce rates should make them pause.

Many entrepreneurs believe that a second mortgage (and home equity lines of credit in particular) are one of the best financing mechanisms for startups. This line of thinking is understandable and, at times, unavoidable. For instance, the Small Business Administration’s 7(a) program and many other lenders prefer or require that borrowers who have collateral available use it and receive a fully-secured loan. Moreover, these secured loans are one of the cheapest financing options that are available to entrepreneurs. That was the good news. The bad news is that there are some dangerous trends in the housing and marriage markets that could complicate the situation.

First, there has been an increase in the riskiest share of Federal Housing Authorities (FHA)-backed mortgages – these are the ones that require down payments of 3-5 percent — and a decrease in the average credit rating. A factor in this has been the rise in non-bank lenders, such as Quicken Loans, which can afford to have looser credit standards than traditional banks. The worry is that this development can push up delinquencies and slow the growth in home prices.

Second, this new competition in the mortgage market have led to more companies offering second mortgages that take the total of both loans up to 125 percent of the home value… It could be a dangerous territory even for good credit borrowers if delinquencies do start to trigger a price to slow down.

Third, the divorce rate among entrepreneurs may be greater than the national average of 40 percent, especially for second and third marriages. A Toronto based divorce lawyer estimates it at about 50 percent, 67 percent and 74 percent for first, second, and third marriages respectively. Why is this important? Divorce and second mortgages are a messy mix. It is best to sell the house in the case of a divorce and pay off the loan, but in a slow housing market this may not be possible. Some lenders allow one spouse to assume a mortgage, however, this is rare. The only other option is for both spouses to agree to continue paying, though if this does not happen, both spouses credit ratings will be ruined.

In sum? Entrepreneurs should pause before putting their house at risk for their business or they wind up losing both. If they are still set on tapping this source of finance, they should shop around carefully. Avoid loans with dangerous features like prepayment penalties, balloon payments, and double insurance. And if married, perhaps, they should make an effort to “work on it.” If they do end up with a divorce and cannot sell, the settlement terms should state that the payments are the sole responsibility of the spouse living in the house. This condition is necessary to tap future loans, since the mortgage will remain on both credit reports.

In other words, entrepreneurs should remain optimistic about their business, but temper it with some realism about market and societal trends, and, perhaps, opt for a darker shade of rose-tinted spectacles!

Silicon Alley - Then and Now
I Wish I Knew Then What I Know Now: Financial Metrics for SaaS Businesses
How to Prepare for the Rigors of Due Diligence
What To Do After You Raise Your First Million

Krista Tuomi is an assistant professor in the International Economic Policy program at AU’s School of International Service. She has worked for many years as a policy analyst in the areas of innovation and investment and recently her focus has been on best practice in the start-up investment climate, particularly on policy related to angel investing, crowdfunding and seed financing. Her passion for the field of innovation and entrepreneurship extends into her pro-bono work, which includes working with SCORE, Boots to Business, the Veteran Small Business Challenge Competition, Syracuse's Institute for Veterans and Military Families, and the Angel Capital Association.