You are here: Home / Industry News / A Look Ahead at Venture Capital in 2016 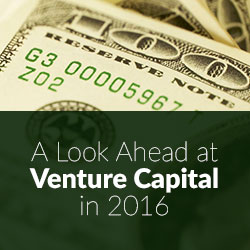 Last year was significant for venture capital (VC) investment. Many of the trends we saw in 2015 will continue in 2016, but some are likely to change. For example, 2015 was a banner year for unicorns (companies valued at $1 billion or more), but many experts are predicting some of these unbelievable valuations to trend downward. On the other hand, experts are predicting VC investment in cybersecurity companies to continue to explode.

The Rise of Smaller VC Funds and Crowdfunding

Conventional thinking is that the top VC funds earn the majority of the returns, but that’s not necessarily true anymore: smaller VC funds are now earning some of the largest returns, thanks to a more complex market. This should continue in 2016 as small funds distinguish themselves and the VC market continues to increase in complexity. 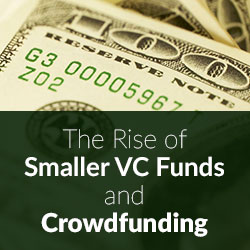 As this happens, alternatives to traditional VC fund investment will capture a larger share of the market. Corporations are increasingly investing in small companies to spark innovation. In addition to potential financial benefits, these corporations gain from reducing the risks associated with innovation and lower acquisition costs for small companies. This rise in corporate investment should cause entrepreneurs to focus on attracting corporate investors, and cause traditional VC investors to innovate and demonstrate new ways to provide value to startup founders.

Similar to corporate investment, crowdfunding has become a major alternative to traditional VC financing over the past few years. In fact, crowdfunding is on track to account for more funding than VC in 2016. This surge will inevitably lead to an increased number of unsophisticated investors getting burned by less reputable crowdfunding platforms. We may also see increased interest from the Securities and Exchange Commission (SEC) in cracking down on the crowdfunding platforms that commonly take advantage of unsophisticated investors.

Whether sophisticated or unsophisticated, many investors are wary of venture investments despite positive performance from the VC market in general. Thus, 2016 is ripe for increased investor education on venture investments, which should lead to increased investment in venture-class assets. Investment advisors and wealth managers should capitalize on this opportunity and help their clients tap into the VC market, especially local and regional VC funds and startups.

Likewise, there should be plenty of opportunities for local and regional VC investment because of the continued increase in the number of accelerators and incubators for startup companies. This should augment local and regional economic development by creating jobs and bringing new talent into the various localities.

For startups participating in accelerators and incubators, 2016 should see more diversity in the makeup of startup founders. At least one study released in 2015 showed that investments in companies with at least one female founder performed 63 percent better than companies with all-male founders. Women-led accelerators like Upstart in Memphis, Tenn. are helping more and more women gain the confidence and resources they need to launch their own startups. 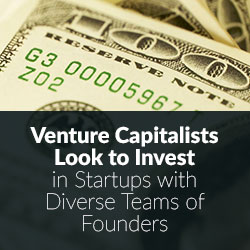 Armed with this knowledge, VC investors will look to invest in companies with diverse teams of founders. Likewise, startups should take advantage of this by diversifying their teams with females and minorities, which would, in turn, build on the trend of minority entrepreneurs. 2016 may be the first year where the majority of entrepreneurs are minorities.

As mentioned previously, one trend from 2015 that will likely continue is VC investment in cybersecurity companies. Cybersecurity incidents are in the news every day, so it’s no surprise that 2016 should see the continued rise of VC investment in cybersecurity. Consumers want to protect the privacy of their personal information, and companies that use, transmit or store this information have an obligation to protect it, creating a massive need for a variety of cybersecurity-related products and services. While there are many companies currently providing these products and services, there remains a demand for new and innovative cybersecurity companies, which has created enormous investment opportunities. Some of the innovative cybersecurity technologies to watch in 2016 include neutralizing cyberattacks after a breach, and the use of artificial intelligence to identify and block threats before they happen.

While many of the VC trends from 2015 will continue in 2016, such as the continued explosion of cybersecurity investment, it is expected that we will see fewer unicorns in 2016. This could be the year when crowdfunding surpasses VC as the primary source for startup funding, and minority entrepreneurs could soon become the majority.