You are here: Home / Industry News / Why Israeli Founders are Drawn to New York City 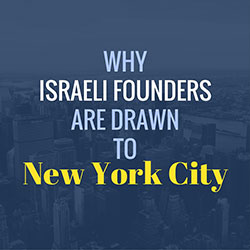 According to a report issued in January 2016 by the IVC Research Center and KPMG Israel, 18 new venture capital funds closed capital in 2015, and  four VC funds raised more than $100 million each, 59% of total capital. The Israeli business community enjoys a worldwide reputation for technology innovation and entrepreneurialism vigor — one that is very much disproportionate to its small size and population (just under 8 million, in a country about the size of New Jersey.)

It isn’t possible for Israel’s small domestic market to support all these startups as they scale, so it makes sense that most of the country’s technology startups almost immediately start to look abroad for new markets to enter, financial resources, and management talent that may not be available in Israel.

Various interests in China and India are working to attract Israeli startups, as are more traditional destinations like Australia, South Africa, and the EU. In North America, cities and regions with strong tech startup communities and established Israeli expat networks like Los Angeles, Toronto, Miami, and New York, are all obvious destinations.

Eyal Bino, 40, a New Yorker by way of Tel Aviv, came to the US to play college basketball after serving in the IDF’s Unit 8200 group (military intelligence.) After graduation, Bino stayed in NYC to work as a media producer and, after working business development for an education technology company both in Israel and New York, he launched ICONYC labs, based in NYC, a unique acceleration program to support early-stage Israeli tech startups scale and become successful global companies.

Many cities and regions across North America offer vibrant entrepreneurial communities and healthy technology ecosystems. The question is, why are so many early-stage Israeli founders naturally attracted to New York City? One of the main ideas behind ICONYC is that it gives New York-based VCs the ability to tap into Israeli innovation that they otherwise would not likely gain any exposure to. “They can tap into these great Israeli-based start-ups…at a lower evaluation than they would if the same company was based in New York,” says Bino.

From a cultural perspective, in many ways, Israelis often resemble the “typical” New Yorker. According to Bino, “Israelis and New Yorkers both operate in a state of permanent restlessness, where we want to make stuff happen and make it happen fast,” he continued: “also, it takes a lot of very hard work to build a company in New York, and Israelis are already known for being tremendously hard workers.” There also happens to be a very well-established community of Israeli-Americans in the New York City metro area, which offers a very valuable support network.

“There’s something about the ‘I want to change the world’ culture in Silicon Valley that is a little bit unnatural for Israelis, who tend to be more focused on building a company and growing revenue” says Bino. Sky-high valuations are also more prevalent in on the West Coast.

“NYC VCs, on the other hand, are more about the bottom line, and they tend to prefer funding events based on realistic valuation rather than sheer perception, and that approach is very attractive to the more pragmatic style that is characteristic of Israeli founders.”

Many Israeii startups that move to New York City do so because they complement its existing base of industry, something that obviously makes sense in terms of prospecting for business partnerships and overall prospects for growth.

“Many Israeli startups are leading advances, particularly in the realm of video and ad tech, so the prevalence of existing companies, brands and agencies that are in the media and marketing sectors make New York an ideal place for them to set up shop here,” said Chaim Haas, a long-time NY-based PR professional who has worked with numerous Israeli startups over the past two decades.

“Also, if you think about it, for startups focused on direct sales to other businesses, there is a real productivity ‘edge’ to being in NYC,” added Arie Abecassis, co-founder and partner, ICONYC labs. “Imagine how many NYC sales meetings you can do in the course of a day by walking to meetings, rather than being in a car?”

This approach isn’t without its challenges, however. One of the most significant barriers Israeli founders have to deal with in New York lies in communications issues.

Israelis are used to a loose and informal communication style, which, unfortunately, does not always translate in the US business environment. This is not to say that a “language barrier” presents a problem. In fact, as far as fluency goes, educated Israelis are reliably adept with English (starting in 3rd grade) and many speak multiple languages in addition to Hebrew and English (i.e. Arabic, Russian, Spanish and French.)

The issue lies instead with Israeli founders, and how many of them seem to struggle with the idea that, no matter how impressive their underlying technology may be, they are not going to have successful meetings in New York if they cannot present a structured and well-organized company narrative. If an Israeli founder struggles to provide answers to typical questions during a pitch (i.e. who are your customers, who exactly are the competitors, what problems will it solve, how is it relevant to the targeted markets) it can lead to negative results.

“Israelis are gregarious, and don’t really like to communicate in soundbites,” says Bino.

In an environment where VCs are flooded with information, the ability to deliver a clear and compelling company narrative is more important than ever, which is why Bino males sure that “every founder we work with at ICONYC understands the importance of structured storytelling.

US Investors in China's Tech Sector Must Navigate Through Uncertainty
Legal Considerations When Forming a Venture Capital Fund
What Startups Need to Know About Compliance for Remote Employees
The Great Expansion of Venture Capital: A Ten-Year Progression

A veteran PR consultant to many successful startups, Dave Hochman is the owner of DJH Marketing Communications, a PR and content marketing firm in Red Bank, NJ. Please go to www.djhmarcom.com and @davehochman on Twitter. Dave may be reached at djhochman@djhmarcom.com