You are here: Home / Industry News / Here’s How You Know You’re an Entrepreneur

Entrepreneurs are born. Nature gifts them boldness, vision, stamina, resilience, confidence, infinite enthusiasm and an unusual appetite for risk. They’re natural disruptors. They’re don’t like convention because, to entrepreneurs, there’s nothing more constricting. They thrive on the oxygen of opportunity. They don’t scare easily. They always choose the road not taken. 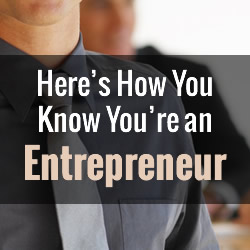 If you need to go to university to learn how to be an entrepreneur, it’s unlikely you are one. You’re probably someone who works for an entrepreneur, some of the greatest of whom dropped out of university (Gates and Zuckerberg most famously, and they certainly weren’t taking classes in entrepreneurship).

Every company was started by an entrepreneur. These people are in the minority. They’re not better or worse than other people, they’re just fewer in number. The rest, they include myriad individuals of huge brilliance, thoughtfulness and capability, people who innovate and create, but don’t have it in their DNA to step into the corporate wilderness and make something new.

Here are things entrepreneurs do naturally, without having to take a lesson.

4 Tips To Drive Long-Term Success For Your Startup
Startup Success or Failure? The Tipping Point
An Investor’s Take on SaaS KPIs Essential for Investment-Worthy Startups
Anyone Can Now Become a VC Investor