You are here: Home / Uncategorized / From Bootstrapping to Venture Capital: When Is It Right to Switch Gears? 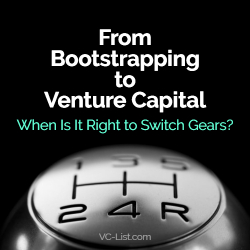 In the world of entrepreneurship, timing is everything—especially when it comes to raising money. Increasing numbers of entrepreneurs are opting not to pursue venture capital during the earliest phases of conducting business in favor of another activity: bootstrapping. This involves talking face-to-face with potential customers about their needs (and being able to pivot the focus of the business as a result), engaging the ideal mentors and board members, and learning what potential competitors are doing. For many young startups, bootstrapping can be a much superior option to seeking VC capital.

At a later stage, however, as companies grow and thrive, there may very well come a time when it does makes sense for entrepreneurs to begin seeking venture capital. Specifically, there are five milestones that, once they are reached, can signal that the time may be right to go down the VC route. Here are the five milestones, to which I have added some insights from my own experiences as the cofounder of a startup named ObjectiveEd, which is dedicated to gamifying educational curriculum for students with disabilities, from pre-K through 12th grade.

Venture capitalists review dozens of business plans every day. When they see a company that is operated by a management team that has achieved its goals of eliminating risk for investors and is now ready to scale its operations, they pay attention. It’s a rarity, and it can make a difference between getting that critical face-to-face meeting and being passed over.

By keeping careful tabs on each of these five milestones and noting when each has been achieved, entrepreneurs are more likely to find that the time is right to begin to pursue VC funding—which can set the stage for stronger and faster growth that will hopefully characterize the company’s next phases.

Entrepreneurs Who Want to Attract Investors Don’t Make These Mistakes

Marty Schultz, a serial entrepreneur and founder of a string of successful software companies, has been an advocate for the idea that entrepreneurs should not immediately seek venture capital but should look initially at bootstrapping. Marty balances being an award-winning keynote speaker on the topic of bootstrapping and being cofounder and President of ObjectiveEd.