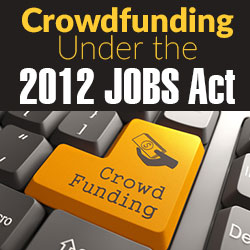 The Jumpstart Our Business Start-ups Act of 2012 (the “JOBS”) was passed by a bi-partisan majority in both houses of Congress and signed into law by President Obama.

On Oct. 23, 2013 the SEC issued proposed rules, implementing the crowdfunding provisions of Title III of the JOBS Act (the “Proposed Rules”). Here is a summary of the Proposed Rules.

The Proposed Rules would make it possible for non-public companies to sell securities to non-accredited investors over the Internet through registered “crowdfunding portals.” Under the Securities Act of 1933 (the “1933 Act”), companies may not sell securities to investors unless the securities are either registered (generally requiring an initial public offering or “IPO”) or exempt from registration. The “crowdfunding” offerings authorized by Congress through the JOBS Act represent a new exemption from registration (now contained at Section 4(a)(6) of the 1933 Act) and the Proposed Rules, if adopted, would make it possible for sales of securities under this new exemption to commence.

Under the Proposed Rules, a Crowdfunding Issuer must prepare and file a Form C on EDGAR before the commencement of the offering. Among other things, Form C would need to include information on:

The Proposed Rules would require a Crowdfunding Issuer to provide the following financial information, depending on the aggregate amount the Crowdfunding issuer offers and sells under the Crowdfunding Exemption in a rolling 12-month period:

A Crowdfunding Issuer would also be required to provide a narrative discussion of its financial condition covering, among other things, its historic results of operations and liquidity and capital resources. According to the proposing release, this discussion would be similar to the “management’s discussion and analysis” (or “MD&A”) required in the financial statements mandated for publicly-traded companies, but generally not as lengthy or detailed considering the probable more limited operating history, complexity and scale of Crowdfunding Issuers.

Each Crowdfunding Issuer would be required to file with the SEC and post to its website an annual report within 120 days of the end of each fiscal year (designated Form C-AR). This annual report would include information similar to the offering statement on Form C, including the financial statement and narrative disclosures meeting the highest standard applicable to any of the issuer’s past offerings pursuant to the Crowdfunding Exemption, but excluding offering-specific information.

The annual reporting requirement would continue until one of the following events occurred:

The Crowdfunding Issuer would be required to file a notice of termination of its annual reporting obligation on Form C-TR.

Under the Proposed Rules, issuers would only be permitted to advertise their offerings pursuant to the Crowdfunding Exemption through a notice containing certain specific limited information (similar to “tombstone ads” under Rule 134 under the 1933 Act). The notice must direct readers to the Crowdfunding Portal for the offering. Potential investors could then access additional information about the offering through the platform. The notice could be in print or distributed electronically, including through social media.

The Proposed Rules do not restrict or otherwise limit a Crowdfunding Issuer’s ability to:

The Crowdfunding Exemption is limited by its terms to offerings not exceeding maximum amounts of capital raised and amounts invested. The Proposed Rules is designed to help issuers and investors apply these statutory limits. The Proposed Rules clarify:

This requirement could become problematic as it would require the issuer to demonstrate how a non-crowdfunding investor came to know about the exempt offering. It is difficult to imagine how an issuer could satisfy this requirement, other than through a self-serving certification made by the investor.

Under the Proposed Rules, an issuer will be unable to rely on the Crowdfunding Exemption if any person covered by the rule was involved in a “disqualifying event.” Covered persons include:

The disqualifying events covered by the Proposed Rules are modeled on those of Rule 262, and include, among other things, certain securities-law related injunctions and restraining orders entered in the last five years and certain regulatory orders entered in the last ten years. Like the Rule 506 disqualification provision, the Proposed Rules would include an exception for disqualifying events that the Crowdfunding Issuer did not know of and, in the exercise of reasonable care, could not have known of.

Under the Proposed Rules, if an issuer compensates a person to promote the offering through the Crowdfunding Portal’s communication channels, the Crowdfunding Issuer must take reasonable steps to ensure the compensated promoter identifies itself as such.

As required by Section 4A(e) of the 1933 Act (as amended by the JOBS Act), securities purchased in a Crowdfunding Exemption transaction cannot be resold for a period of one year, unless such securities are sold to the issuer, to an accredited investor, as part of a registered offering or to a family member of the purchaser in connection under certain limited circumstances.

The Proposed Rules include a safe harbor for issuers that attempt to comply with Section 4(a)(6) but fail to do so. The safe harbor is modeled in part on a similar provision in Rule 508 of Regulation D.

Section 12(g) of the Securities Exchange Act of 1934 (the “1934 Act”) requires an issuer to register a class of equity securities (making the company a reporting company) when its assets and the number of record shareholders of that class of securities exceed certain thresholds. The JOBS Act added Section 12(g)(6) to the Exchange Act, requiring SEC rulemaking to exclude from Section 12(g)’s record holder calculation securities acquired in Crowdfunding Exemption offerings.

In the Release, the SEC expressed continuing concern with respect to the ability of purchasers of Crowdfunding Exemption securities to “fend for themselves”, particularly with respect to areas of enterprise valuation as it relates to securities pricing, the lack of market liquidity for the investment after the initial one-year holding period and exposure to “down-rounds” and other dilutive tactics.