You are here: Home / Crowdfunding News / Why Corporations Should Crowdfund 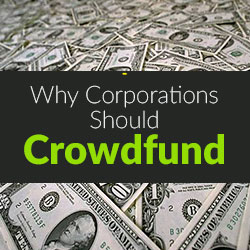 The first time the word crowdfunding used under its current definition was in a 2006 blog, an incredibly recent birth for an industry projected to be worth $96bn by 2025. In the years since that first post, platforms such as Kickstarter have become leaders in the industry for filmmakers, artists, and aspiring creatives who see it as an alternative to the “traditional route” of financing through investors.

Because of this adoption by the greater artistic community, many skeptics view crowdfunding as something done out of necessity, however, I disagree. I see crowdfunding as a strategy to scale a corporate brand by leveraging the community in a new, creative way. Engaging the audience, increasing brand awareness, driving press, and – last but not least – raising money. Additionally, I don’t feel that this is a new concept but rather has been used successfully by generations of marketers and outside-the-box thinkers.

Looking for an example? Here you go…

In 1885, when the Statue of Liberty arrived in New York, it still didn’t have a pedestal to stand on. Not only did the pedestal not exist, the $250,000 needed to build the pedestal had only been partially raised. The city of New York didn’t want to put up the funds and other cities would only ante up if the statue came to them. That’s when Joseph Pulitzer of the New York World saw an opportunity.

Using his newspaper for promotion, Pulitzer turned to the public and raised $101,091 for the development of the pedestal. The money came from everywhere and everyone. For example the mayor of Buffalo donated his entire annual salary while Philip Bender, his wife Eliza, and their eight children pooled their money and donated $2.65, the smallest children donating $.10 each.

It wasn’t necessarily about the money, it was about being a part of something bigger. In fact, 75% of the donations were less than $1 but each donation counted and in return, each donor was given a reward such as a statuette of Liberty, a gold coin, or their name in the newspaper.

Yes, in essence, the Statue of Liberty is standing in New York today because a large, established brand, made the decision to forego the traditional routes of financing and target the end users who were emotionally engaged in reaping the benefits of a successful campaign.

What did The World get out of it? A lot.

The campaign became front page news and led to additional campaigns, business deals, and an increase in brand awareness exponentially greater than if Pulitzer had simply paid the $100K out of his own pocket. The World was seen as a patriotic organization looking out for the good of New Yorkers even though, in reality, Pulitzer simply focused his influence in one particular cause that, on the surface, had no direct correlation to the publishing industry.

Corporations today can learn a lot from Pulitzer’s strategy. The hardest part of running a crowdfunding campaign is building the audience, however, if your brand already has such an audience, it might be time to think about putting that power to work.

At FilmBreak we specialize in finding creative ways to engage the audience, often driving that community to an owned-and-operated website that functions similarly to a crowdfunding platform, but is completely built to align with the company’s current brand and message.  Campaigns like this can take many forms from a straightforward crowdsourced website like Change the Course to a full, multi-media crowdsourced campaign like the now-famous Doritos “Crash the Super Bowl” ads.

Whether it’s a Kickstarter campaign, a custom website, or an enormous multi-media effort, at the core, they all have the same mission: Leveraging an existing community to take an action that helps both the user and the brand in a unique way.

Before launching any campaign, it’s important to make sure that the proposed effort addresses three elements, and if you take anything away from this article, I ask that you take this…

Making these three elements pillars of your campaign will endear your to millennial audiences who are most likely to participate in your campaign. For inspiring companies that do this REALLY well, look to TOMS and Warby Parker. (My latest pair of Warby Parker glasses are being delivered today!)

So the question becomes, was this the case before the social media generation? How did Joseph Pulitzer address these three elements and can we draw a parallel between the successful Statue of Liberty campaign and modern day successes? Stripped down, the similarities are striking and, whether consciously or otherwise, Mr. Pulitzer nailed each element right on the head. He gave the public an opportunity to get directly involved with the development of an enormous public works project that had never been done before; he accepted contributions of any amount and rewarded the donor with the priceless satisfaction of seeing their name in The World; and the result changed the New York City skyline and has become a symbol for freedom and liberty worldwide. One. Two. Three.

Your campaign might not be to the scope of Pulitzer’s and it doesn’t have to be, but every corporation can benefit from developing and emotionally engaging their community through the strategy of crowdfunding – tried, tested, and proving over the last 150 years.

If you’re ready to take the next steps, see my previous post on how to prepare your campaign for launch.

A Northern California native, Taylor moved to Southern California to attend Whittier College. Upon graduation, he began formulating an innovative marketing strategy which he launched, in 2010, as FilmBreak, a marketing platform and crowdfunding agency. FilmBreak allows creatives of all verticals to build and engage their fans earlier than ever before through platform agnostic crowdfunding and innovative social media marketing.  FilmBreak gives clients the consumer momentum needed to release a new film, launch a new product, or raise a round of financing. FilmBreak’s clients include Entertainment One, Sean Astin, Zachary Quinto, George Lopez, Britt Robertson, Lil Wayne, Doug Jones, and others. An enthusiastic member of the Southern California technology community, Taylor has recently been featured in Variety, Forbes, Los Angeles Business Journal, and San Francisco Examiner.