You are here: Home / Startup & Funding Tips / How to Master the “Competitors” Slide in Your Pitch Deck – Q&A with Wayne Embree 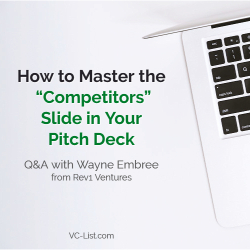 When that all-important “who are your competitors” slide comes up in the pitch deck, too many founders tend to reply with not-quite-coherent, or even outright not-believable answers. In order to examine this question, ‘who are your competitors?’ I recently interviewed Wayne Embree, an experienced seed-stage investor. Based in Columbus, Ohio, Wayne has been involved in over 200 investments, including sitting on over 50 boards and taking more than 60 businesses through exits.

Dave Hochman: Why do so many founders fall short when it comes to handling this question?

Wayne: It starts with this idea so many founders start off with this premise that they actually don’t have any competitors. And then the general response to that is, “then you have no market. I think people are afraid of bringing up competitors from the perspective that it somehow diminishes their business….as opposed to giving it credit. They need to be thinking about, you know, competitors, as validating a market.

Dave: What advice would you offer to a founder with a good idea but fails to recognize the importance of acknowledging the competitive landscape? “we don’t have any competitors.”, right?

Wayne: Really go and really dive in and figure it out. Do the research and fully understand the marketplace, the competitors, and how they’re going to win. It’s also usually a good sign if a founder has researched the characteristics and capabilities of the chief executives and management teams from the competitors. Really go into the details of the companies in the competitive set.

Dave: has there ever been a situation where “we don’t have any competitors” was an actual viable response, that actually belonged on a slide deck? 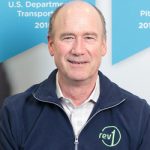 Wayne: No. Because the marketplace you’re usually trying to serve has an existing way of dealing with a problem. Even the first person developing a wheel had competition, which was the sledge. Honestly, I cannot think of a single case where there wasn’t at least a status quo that represented competition. And the second biggest fail is discounting or even not considering the status quo.

Dave: would you say that founders in recent years have been more or less competitor aware… any trends? What are you seeing out there when you see the slide?

Wayne: Apologies for the sarcasm but we have this thing called the internet. And even though as most people know not everything on the internet is true, you could at least, you know, Google your industry that you’re in. We had people pitch us who didn’t even Google the name they picked for their company and didn’t know it was already taken. It’s an extreme example… but not too far off.

Dave: hard to imagine that a company seeking funding that would be able to get a meeting with a VC firm would come in that unprepared or unaware.

Wayne: it happens more often than people think. And in some cases, they’ll go so far as to skip over their research on the venture firm, and so fail to learn that the venture firm they’re meeting with has actually funded their biggest competitor. The reality is that part of competitor analysis is ‘how well do you know your business, your market, your customers’ and so, if you spend any time at all with your prospective customers, which you should, they will tell who all your competitors are.

Dave: what’s the worst ‘our competitors’ slide you’ve ever seen?

Wayne: I think the worst was just a complete disregard for that. I mean, there was no slide. And when asked about the competitors, it was clear that the company had not even thought about that they might have competitors. They just weren’t interested in having that conversation. And so, yeah that would be the worst one, when there’s just no recognition of competition at all.

Dave:  So, some advice. What is one key element that founders should consider adding when they sit down to craft that slide?

Wayne: So, my perspective is that the best way to project a competitor’s slide is the feature-function-value” matrix. Show you have a really solid understanding your feature set. Cheaper-faster-better or not features. It’s about being able to articulate what is it that is really going to make the customer value your product over somebody else. So, having that voice of the customers, is the key features and you know a value equation, on that matrix. Also, need to focus both on the incumbents AND any other startups that are in the marketplace

Wayne Embrey can be found at https://www.rev1ventures.com/blog/author/wembree/

A veteran PR consultant to many successful startups, Dave Hochman is the owner of DJH Marketing Communications, a PR and content marketing firm in Red Bank, NJ. Please go to www.djhmarcom.com and @davehochman on Twitter. Dave may be reached at djhochman@djhmarcom.com