You are here: Home / Startup & Funding Tips / Common IP Issues Facing Startups and How to Avoid Them 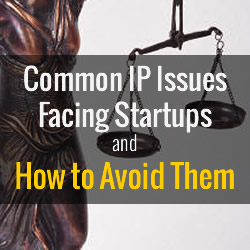 Over the years of consulting startups I have ran into times where I needed to call Mark Leonard of Davis & Leonard LLP.  Mark is a top notch attorney focusing on trademark and copyright registration, general intellectual property (IP) counseling, e-commerce, licensing, and litigation in the areas of trademark and copyright infringement, computer intrusion, Trademark Trial and Appeal Board proceedings, and ICANN Internet domain name disputes.

Often when calling Mark it is in situations that could have been avoided by the startup founders and management if they had considered IP issues in their initial business planning.  Such hiccups can be very serious and are a clear black mark in the history of the startup which becomes a liability when looking for angel or venture capital funding.

Not only does it become a problem when looking for funding it also pulls founders’ and staffs’ time and resources from growing the company to fighting a lawsuit.

To help startups educate themselves before they get into hot water Mark has taken his time to let us interview him on common IP issues facing startups.

Joanna: When choosing a name for a new company what are some common mistakes startups make?

Mark: One of the top mistakes I see startups make is failing to conduct a comprehensive trademark search prior to launching the company.  This is likely because there are a number of myths that cause businesses to believe a search is unnecessary.  For business names, a very prevalent myth is that there is no need to search if the Secretary of State’s office approves the name of a corporation or limited liability company.  The Secretary of State’s name approval process uses criteria different from trademark law and only checks against corporate and limited liability names registered with that state.  It does not does not consider federally registered marks, partnerships, sole proprietorships, business entities in other states, or even state trademark registrations.  It is not uncommon for  trademark conflicts to arise between businesses in the same state that have both had their names approved by the Secretary of State.

A second myth is that it is sufficient if no identical matches are found after searching a mark on the Internet or United States Patent and Trademark Office (“USPTO”) records.  Trademarks need not be identical for a conflict to arise, phonetic similarity or similar meanings are sufficient.  These searches are also incomplete because trademark rights are acquired through use not registration and many businesses do not advertise on the Internet.  Thus, these searches may miss potential conflicts.

Startups should also be wary of mass market legal service companies that offer trademark registration services.  These companies often generate voluminous search reports, but because they cannot give legal advice there is no explanation as to whether the reports show any potential conflicts or not.  Startups should work with an experienced trademark attorney to conduct a comprehensive trademark search early in their business planning process to ensure the chosen name for their business, product, or service does not conflict with another trademark.

Joanna: A couple of years back a hot Silicon Valley startup named one of their key products the same name as a European nonprofit. The startup’s product had nothing to do with the mission or focus of the nonprofit and wasn’t even sold in the same industry or same country. However the European nonprofit was fairly wealthy and sent several cease-and-desist letters and threatened to file a lawsuit if the product name wasn’t changed.  Facing the threat of a lawsuit, the startup ended up having to come up with a new product name after it was heavily branded, and incur the costs of rebranding and throwing away all its marketing material.

What are the best practices when choosing product or company names?

Mark: Coming up with a protectable trademark is very important.  Whether a word or name is protectable as a trademark is determined by its strength. The strongest marks are fanciful, such as made up words like “Xerox”, or arbitrary, English words that have nothing to do with the product or service they are used with, such as “Apple” for computers.  The next category of strength below arbitrary or fanciful is suggestive.  A suggestive mark suggests, but does not directly describe, the qualities associated with the word in connection with the product or service with which it is used.  An example is “Apple-A-Day” used in connection with vitamins.  “Apple-A-Day” is associated with being healthy which is a characteristic that comes to mind when thinking about vitamins.

The next type of marks are descriptive.  Descriptive marks immediately convey a characteristic of a product or service, such as “5 Minute Workouts” as a mark for series of workout videos that can be completed in five minutes.  Descriptive marks are very weak and may be difficult to register or enforce.

The weakest category is generic marks.  A mark is “generic” if it is commonly used for the general name for a product rather than for identifying a particular source of a product.  “Thermos”, “escalator”, and “aspirin” are examples of marks that have become generic because the public commonly thinks of and uses these terms to name the products themselves rather than to identify a specific source or origin for them.

Startups should strive to choose arbitrary, fanciful, or suggestive marks.  The distinction between suggestive and descriptive marks is very fact sensitive and may not be readily apparent.  An experienced trademark attorney can help a startup ensure their marks are protectable and should be involved early in the trademark selection process.

Joanna: Startups often have limited resources and try to cut corners in hopes of saving a dollar here or there. I often have to remind startups to never use clipart from other websites. Often those reminders aren’t taken seriously until I give them examples of an actual founder of other startup that have called me in desperation after they have received letters from stock photo companies demanding payment of a $21,000 fine for using a photo without the proper license. The founder ignored the letter but then realized this wasn’t a joke as more letters showed up and lawyers started to call. At the end the founder settled the case out of court with a lawyer’s help paying $1800 however the issue could have been avoided entirely by buying the correct license from the start for only $2.

What other IP issues do you see that often cause problems for startups?

Mark:  Startups should have employees and independent contractors sign contracts to make sure that ideas and works created for the business are owned by the business.  It is a common misconception that hiring someone to create a work for a business automatically gives the business ownership of the work. To make sure it owns the rights in all of the intellectual property in works it pays for, a business should enter “work made for hire” and assignment contracts that explicitly confer rights in the works to the business.  This happens very frequently with startups that use an outside web developer to create the company’s web site.  Often the developer agreement is silent on who owns the code for the site or states that the developer owns it.  This means that if there is ever a dispute with the developer the startup can’t simply hire a new developer to make changes to the site.  Website development agreements should specify that the startup owns the code or at least has an irrevocable license to use the code.  I’ve seen many companies have to rebuild their sites from scratch because of this issue.

Startups should also ensure that they keep track of passwords for web domain and social media management.  Often only one employee or founder is responsible for website maintenance and distributing content on social media.  If a dispute develops with that person the startup could be locked out of their accounts if that person is the only one with the account information.

If you find yourself in hot water over an IP issue or want to avoid such problems in the first place you can reach Mark Leonard at 916-362-9000 or through http://davisandleonard.com

Failure to Hold Your Partner Accountable Will Cost You Money and Credibility
Managing Your Patent Portfolio to Attract Investments
Market Research: A Founders Secret Superpower
How Does Angel Investing Differ from Venture Capital?

Joanna Jana Laznicka has worked with startups and venture capital firms in Silicon Valley, Orange County and Canada for the past 22 years. You can connect with her on Twitter or LinkedIn