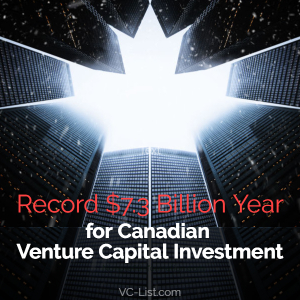 Canadian venture capital investment was stronger than ever in 2019, with $7.3 billion invested across 598 rounds involving 493 companies. All four quarters topped the $1 billion mark, with the most recent fourth seeing $1.7 billion of funding into 143 rounds. Despite being the second most active quarter for the year, and indeed for the past nineteen years, this impressive showing was still down on a quarter-by-quarter basis, with the third quarter seeing an unprecedented $2.8 billion of investment, thanks in part to numerous mega-rounds. 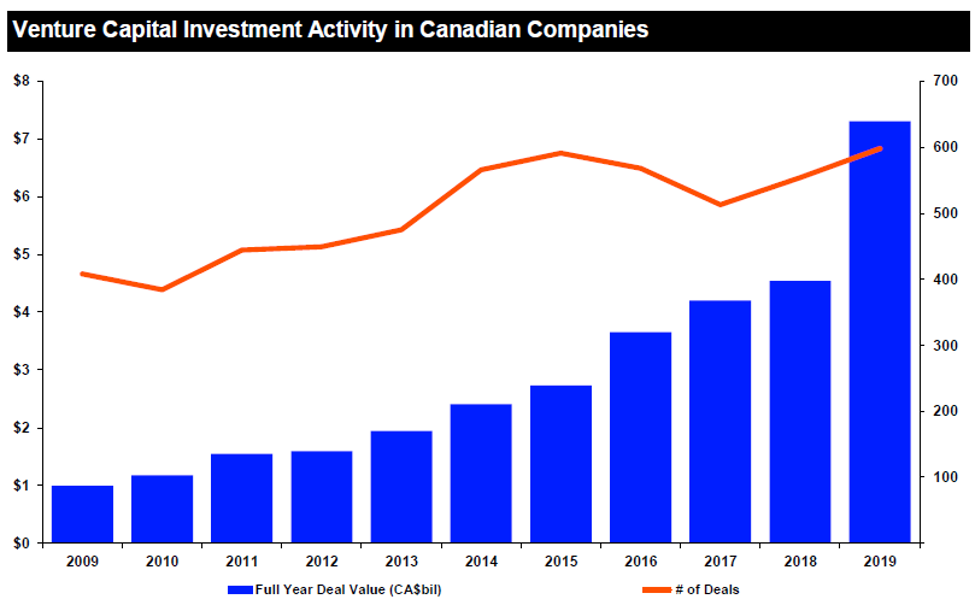 A total of eleven venture capital rounds surpassed the nine-figure mark in 2019, with two of those occurring between October and December, and six between July and September. The latest two added to the list were Québec-based search and analytics platform Coveo, which raised $227 million, and Toronto-based password management software 1Password, which raised $185 million. 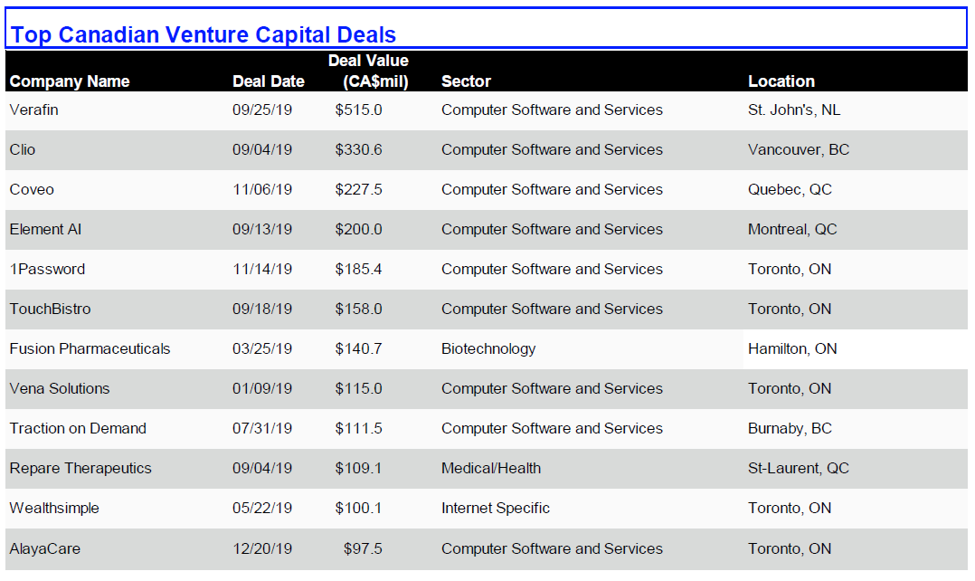 Companies based within Ontario saw $2.7 billion invested across 235 deals for the year, resulting in 7th place for dollar values and 4th place for volumes in the provincial & state rankings, the only regions more active were California, New York, and Massachusetts. Québec companies saw $1.9 billion across 185 deals for dollar and volume rankings of 11th and 6th, respectively.

One of the main driving forces for the increase in investment figures over the past few years has been the increase in funding from non-domestic sources particularly, the U.S. Venture investor firms headquartered within the United States invested $2.8 billion into Canadian companies throughout 2019, a 47% share of all disclosed dollars. This was down from the 50% share throughout the first three quarters of the year, but still above the 46% of dollars contributed by domestic sources.  This marks the first full year that venture capital investment from a foreign nation into Canadian companies has exceeded those from Canada. 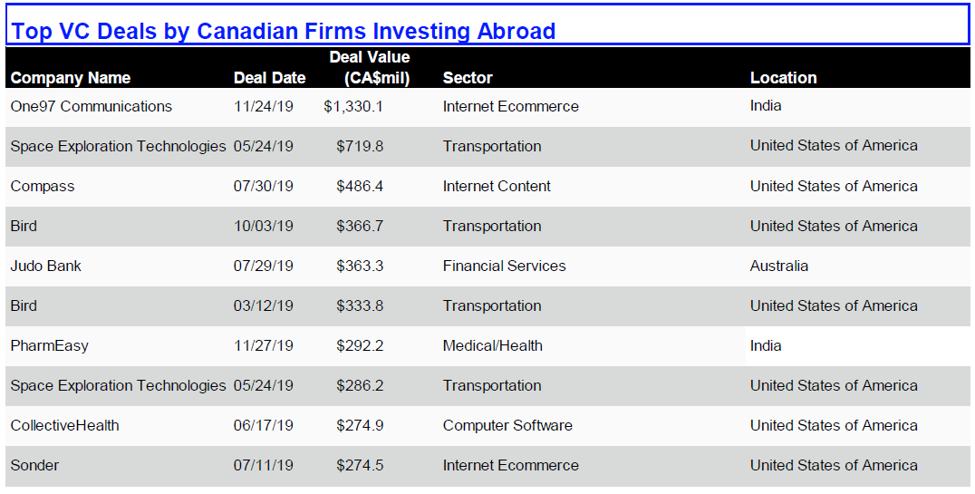 Venture fundraising also reached new highs in 2019, as a total of 37 Canadian VC funds recorded closes during the year, raising a combined $4.2 billion in commitments. This represented an increase of 70% compared to the previous year and signifies investor confidence in the space’s future prospects. Fundraising figures were led by firms iNovia, Radical Ventures, OMERS, and Northleaf, all of which raised more than $300 million. Newly added to the top funds raised list in the fourth quarter was Portag3 Ventures Fund II, which raised $229 million in its second close, bringing its total commitments to $427 million. 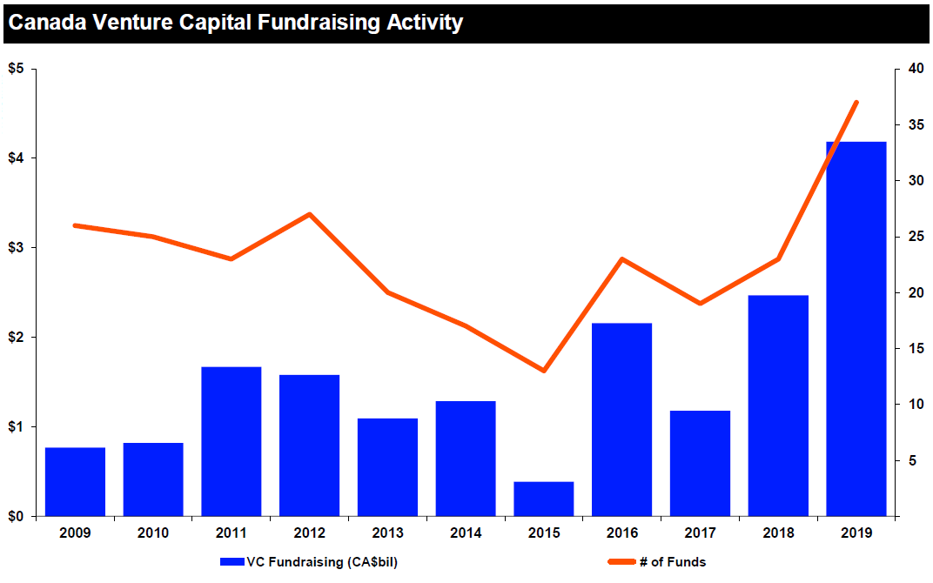 Canadian venture-backed companies completed 47 VC-backed exits during the year, worth $2.0 billion in exit values, a 12% uptick in the number of exits and a 305% increase in values when compared to the lackluster 2018. This also represented the highest exit value since 2014, which is good news for a landscape that has been drying up in recent periods as investors have struggled to realize liquidity events for their investments despite more money pouring in. 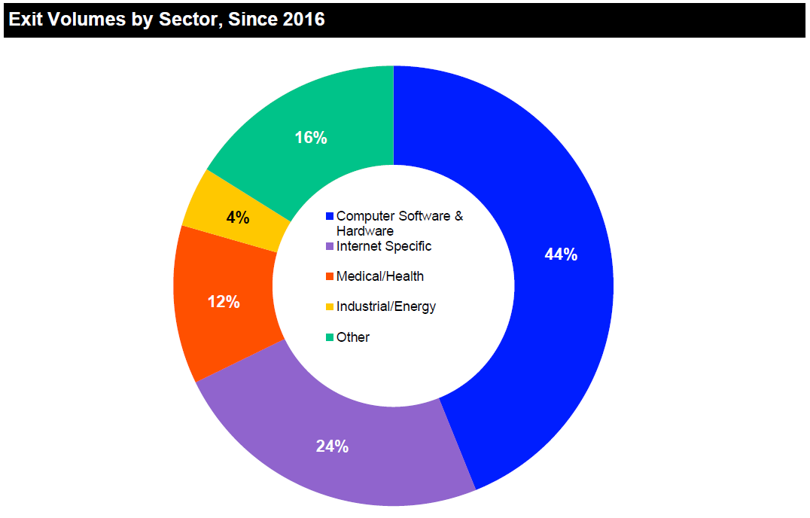 Venture Capital as a Service Business
VC Investing Needs More Skin in the Game
With Security Tokens, VCs Finally Have a Blockchain Technology They Can Be Confident In
“Micro” Venture Capital Funds: Science Experiment or Successful Business?

Greg Beaman is a Private Equity Contributions Manager at Refinitiv and for 3 years has worked with the team responsible for the procurement of content and the communication of broad private equity and venture capital industry trends through the publication of regular research reports. Greg received his Bachelor of Business Administration from Wilfrid Laurier University