You are here: Home / Books for Entrepreneurs 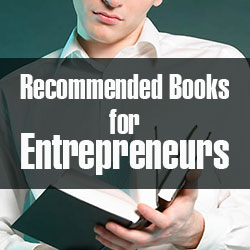 When interviewing venture capitalists and founders of successful companies that got acquired or went IPO. We always ask, which books would they recommend to entrepreneurs and management of startups.

The recommendations included some classics and some surprises of creative takes on business and life’s nuances.

For instance one Silicon Valley VC stated “Many early stage startups have promising products, but broken sales pipelines. They can’t get a first meeting, or if they get the first meeting, they don’t get a second one. This is true for both getting customers and for getting funded. The Key is being able to sell yourself. Dale Carnegie’s 1937 book, How to Win Friends and Influence People is still a classic in this regard.”

At the same time one San Francisco VC recommended Poetry of  Billy Collins, dubbed “The most popular poet in America” by New York Times, as being famous for conversational, witty poems that not only welcome readers with humor but often slips into quirky, tender or profound observations on life.

The list of books will grow steadily as we interview new VC’s and Industry insiders. Keep coming back to find further recommendations.

The Startup Owner’s Manual: The Step-By-Step Guide for Building a Great Company

– This near-encyclopedic guide unlocks the secrets to startup success – walking you, step-by-step, through the tested and proven Customer Development process created by startup expert Steve Blank.

The Four Steps to the Epiphany

– The essential book for anyone bringing a product to market, writing a business plan, marketing plan or sales plan. Step-by-step strategy of how to successfully organize sales, marketing and business development for a new product or company. The book offers insight into what makes some startups successful and leaves others selling off their furniture. Packed with concrete examples, the book will leave you with new skills to organize sales, marketing and your business for success.

Not All Those Who Wander Are Lost

– Volume One of Steve Blank s collected blog posts, featuring war stories and lessons from 20 years in Silicon Valley startups, how to build a successful Customer Development model, and real world advice on creating a successful venture capital pitch. Includes thoughtful ideas on balancing family and career, and finishes up with a rare look into the deep and often secret past of Silicon Valley and its role in both wartime and peacetime high tech. A personal look at the life and times of a Silicon Valley veteran.

The Silicon Valley Edge: A Habitat for Innovation and Entrepreneurship (Stanford Business Books)

– The enormous and sustained success of Silicon Valley has excited interest around the globe. Startup companies the world over are attempting to emulate its high tech businesses, and many governments are changing their institutions in order to foster Silicon Valleys of their own. What accounts for the Valley’s leading edge in innovation and entrepreneurship? This book gives an answer by insiders, by prominent business leaders and academics from the heart of the Valley. They argue that what distinguishes the Valley is not its scientific advances or technological breakthroughs. Instead, its edge derives from a “habitat” or environment that is tuned to turn ideas into products and take them rapidly to market by creating new firms.

The Art of the Start: The Time-Tested, Battle-Hardened Guide for Anyone Starting Anything

brings two decades of experience as one of business’s most original and irreverent strategists to offer the essential guide for anyone starting anything, from a multinational corporation to a church group. At Apple in the 1980s, he helped lead one of the great companies of the century, turning ordinary consumers into evangelists. As founder and CEO of Garage Technology Ventures, a venture capital firm, he has field-tested his ideas with dozens of newly hatched companies. And as the author of bestselling business books and articles, he has advised thousands of people who are making their startup dreams real.

How To Win Friends and Influence People

– One of the best known motivational books in history: Since it was released in 1936, How to Win Friends and Influence People has sold more than 15 million copies. Carnegie’s first book is timeless and appeals equally to business audiences, self-help audiences, and general readers alike.. Proven advice for success in life: Carnegie believed that most successes come from an ability to communicate effectively rather than from brilliant insights. His book teaches these skills by showing readers how to value others and make them feel appreciated rather than manipulated. As relevant as ever before: In the age of Steven Covey and Tony Robbins, Dale Carnegie’s principles endure. The original edition was published in response to the Great Depression, and this fresh hardcover edition will appeal now more than ever to readers wanting tried and true advice on how to deal with a depressed economy. Readers can learn how to get the job they want, improve the job they have, and make the best of any situation.

Sailing Alone Around the Room: New and Selected Poems

– This new volume from the newly appointed poet laureate of the United States has survived the publishing rights war between Random House and the University of Pittsburgh Press. The surface structure of these poems appears simplistic, but subtle changes in tone or gesture move the reader from the mundane to the sublime. In an attempt to sleep, the speaker in “Insomnia” moves from counting sheep to envisioning Noah’s arc to picturing “all the fish in creation/ leaping a fence in a field of water,/ one colorful species after another.” Collins will tackle any topic: his subject matter varies from snow days to Aristotle to forgetfulness