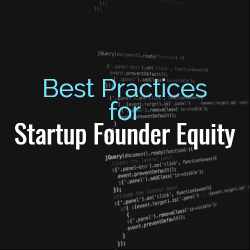 One of the first steps to incorporate a startup company is to issue equity to the founding stockholders.  However, there is more to that process than just deciding how much equity each founder should receive.  Here are a few additional issues to consider:

Legally-speaking, there is no such thing as “founders stock.”  Founders typically receive common stock, i.e. a class of stock with no special rights or preferences.  Although there have been efforts by various organizations to promote the issuance of special classes of stock for founders that contain “super voting” rights or similar protective provisions, in practice, those provisions hardly ever survive the first round of outside investment. In the vast majority of cases, we recommend sticking to the K.I.S.S. principal and issuing common stock to the founders.

Each founder should sign a subscription agreement (often alternatively called a stock purchase agreement) with the company to purchase their shares of stock.  The purchase price is usually nominal; often less than a penny per share.  However, the subscription agreement should also include a contribution of any intellectual property, domain names, business plans, or other assets that the founder has created further the business.

Why would a founder voluntarily agree to this?  Because in most cases, each founder is going into this business with the expectation that all of the other founders will be actively working on the business.  If a founder leaves, regardless of the reason, that expectation has now been frustrated.  Absent a vesting agreement or some other agreement in advance, the other founders will have no way to recover that equity, other than a negotiation with the departing founder, which will usually be expensive at best.  A former founder who still holds significant equity creates a litany of potential problems.  Aside from the potential resentment that the remaining founders may feel, that chunk of now-passive equity may be a deterrent for future investors.  We have seen at least two companies fail in large part due to this issue.

The vesting period is normally three to five years, with four being the most common. Vesting normally occurs monthly over that period; however, if the founders are relatively new to each other, then a “cliff” for the first year may be appropriate; cliff vesting means that the first tranche does not vest until the end of that cliff period.  In some respects, a cliff is like a beta test to make sure the relationship will work.  Founder equity also normally would fully vest upon a sale of the company, although this may not always be the case for equity incentives that the company issues to future employees.

One important tax issue for founders to understand is that, if they receive restricted stock (i.e. stock subject to a vesting restriction), then, in most cases, the founder would be well-advised to file an 83(b) election with the IRS.  Absent this filing, the founder will pay tax on the fair market value of each tranche of shares when it vests at the fair market value on the vesting date.  If the company grows quickly, one might imagine that these tax bills could grow exponentially.  The deadline for filing is strict; the filing must be made by mail no later than 30 days after the date the shares are issued.

Analogous to the expectation that founders will all actively work on the business is the expectation that, at least initially, the founders will get to decide who the other shareholders are.  One way to protect this expectation is by creating a “right of first refusal” in favor of the company or other stockholders.  A right of first refusal gives that company or other stockholders the right to match any offer to purchase shares of the company’s stock.  So, if a founder wants to sell some of their shares, and a potential buyer makes an offer, then the company or other stockholders can match that offer and keep the shares from going to a potentially unknown party.  Typically, the right of first refusal is added to the company’s bylaws so that it automatically applies to new shares of stock whenever they are issued.

By following these best practices, you and your co-founders will establish a solid foundation for your startup and, hopefully, your future success!

Typical Rookie Mistakes to Avoid when Preparing Your Presentation for VC’s
What To Do After You Raise Your First Million
Customer Traction: How Much Is “Enough”?
Should We Be Practicing SAFE Investments?

Chris Sloan leads the Emerging Companies Group at Baker Donelson (Nashville, Tenn.), where he is a shareholder, focused on startups and other emerging businesses. He counsels early-stage, high-growth companies with business planning and formation, venture capital funding, drafting and negotiating vendor and customer agreements, strategic contact negotiations, mergers and acquisitions, intellectual property protection, and other general business law and IP law issues. He often serves as outside general counsel for these companies, and ushers them into the next phases of their businesses. Sloan may be reached at (615) 726-5783 or by email at csloan@bakerdonelson.com.He may be followed on Twitter @casloan.