You are here: Home / Archives for Swin Moore

Swin Moore serves as a senior Vice President at BIP Capital, a venture capital firm that partners with entrepreneurs, providing both operational and strategic direction to help promising early-stage businesses accelerate farther and faster. An experienced venture investor specializing in helping companies accelerate, Moore was also a senior consultant at Vista Equity Partners. His experience further includes work in private equity and investment banking. Moore holds an MBA from the University of Chicago Booth School of Business and an undergraduate degree from Dartmouth College. He resides in Atlanta. 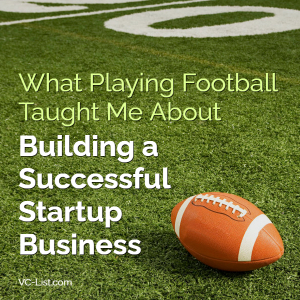 I began playing football at age seven, a passion that carried me to a two-year collegiate career as a cornerback for Dartmouth College before I was permanently sidelined by injury. Today, as a venture investor, I recognize that much of what I learned as a football player can be applied to building and growing a successful company.

Like a high-potential football team, promising startups are comprised of talented individuals, each with their own strengths and skills. And in both scenarios, raw talent alone doesn’t foot the bill—to win, you need everyone buying into and sprinting toward a shared vision, a dynamic and inspiring leader, and the right players delivering flawless execution of the right “plays.”

My high school football coach was affectionately known as James “Friday” Richards. He earned this nickname because when he played in high school in the 60s (the same high school where I played decades later), he always “showed up to play,” according to a community elder. I remember Coach Friday inspiring this same spirit in our locker room prior to a first-round playoff game. His speech capped with “even if you miss a responsibility, you better be flying around knocking the hell out of someone.” Reflecting on this now, I realize the criticality. For our team to be successful, everyone had to be committed, believe in our mission, and run as hard as possible after it.

In both football and business, teams must embrace a shared vision of “how” they plan the game. Properly communicating that common vision and ensuring that it permeates everything that the team does are keys to success, whether “success” means beating the competition on the field or cornering a market.

A company’s mission statement should be the rallying point for its team, and everything top-down to bottom-up must reflect that ethos—otherwise, players simply will not “fly around” a shared goal.

What makes for a dynamic leader? While I do believe that certain leadership competencies can be learned, there are also several innate qualities necessary in a strong leader.

Teams, both on the field and in the office, look for a leader who is unflappable and stoic in the face of adversity. They also look for leaders with the natural charisma to attract and inspire talent. What’s most critical, however, is their role as “Chief Conveyor” of the shared vision that rallies and fuels each and every player.

Dynamic leaders can take various forms, whether it’s the business CEO, the coach who calls plays from the sidelines, or the quarterback who orchestrates the game plan. Much like the fictional Coach Boone in “Remember the Titans,” they are superior motivators capable of energizing teams and extracting their fullest potential. Real-life coaches putting these attributes on display include Bill Belichick of the New England Patriots and the University of Alabama’s Nick Saban, among others. These leaders have cultivated a culture of winning, they possess magnetic personalities that attract and inspire superior talent, and they’ve become synonymous with accepting nothing less than perfect execution.

Finally, natural leaders are highly adaptable and can pivot at a moment’s notice, whether in response to a game-changing turnover or a sudden market disruption that demands an entirely new strategy.

Business leader Peter Drucker said, “Your first and foremost job as a leader is to take charge of your own energy and then help to orchestrate the energy of those around you.” This description hits the nail on the head.

Whether you’re building a successful business or assembling a winning football team, your “players” must have the right skills for their respective roles.

On the football field, this boils down to the right combination of strength, size, and speed at each position. For a defensive tackle, you want a big body who is willing to just “throw their nose in there” to “blow up” the opposing team’s plans. At skill positions, you need a lot of speed—a skill for which Coach Friday was once famously quoted as saying, “you can’t teach it.”

Good CEOs fill out their teams with talented employees who have the right skills and personality traits to properly execute their defined job roles. But, again exercising dynamism and willingness to adapt, they must also be willing to replace those people if they aren’t getting the job done. And even a talented employee (or leader, for that matter) might not be the right person to lead a company into perpetuity. There really is a “right person for the right role at the right time.”

For an offensive play to work, everyone must execute their individual jobs effectively. When everyone is in sync over four quarters, you might “run up” the scoreboard on your opponent. But if just one player misses a blocking assignment, you might end up with your quarterback being blindsided and injured for the season.

Turning the analogy back to business, a company’s sales “players” might be outpacing the entire industry. But if the product and customer success teams aren’t delivering on customer retention over time, then the business will be incapable of sustaining growth. Similarly, if your sales team is stellar but your marketing department can’t feed them leads, the growth engine will stagnate.

In football, coaches and players rely on a playbook designed to either score points or prevent the opposition from doing so. In business, these plays are often referred to as best practices.

There are best practices for everything from aligning and optimizing a company’s sales and marketing organizations to properly constructing an annual budget, all the way down to the minutia of how to conduct effective meetings. Ideally, like plays in a football playbook, these best practices should detail repeatable processes that drive toward results.

Critical note: Both football coaches and CEOs know that when a play or best practice stops working, it’s time to throw it out for a more effective plan. If the opposing team is repeatedly “sniffing out” a certain play, it’s on you to experiment with another play or some variant of the failing play, no matter how popular that play once was. Again, this highlights the premium placed on dynamism in leadership positions.

Similarly, best practices for business operations must be continually refined, and smart organizations always have their “finger on the pulse” of emerging developments—both potential challenges and watershed opportunities.

Bringing It All Together

Whether on the field or in the office, the right mix of the aforementioned “ingredients for success” is elusive. In sports, bellwether teams continually refine their craft. Likewise, startups must constantly attend to their vision and strategy.

And now we turn to “perfection.” The reality in both sports and business is that you never really get there. And the ground is always shifting. It’s an endless battle to maintain excellence. But therein lies the fun of it all. A personal commitment is required of everyone involved to strive for improvement, whatever their role on the “team” may be.

Like the football team committed to marching the ball down the field, startups should remember that each incremental move forward—whether a product launch, a customer win, or hitting a revenue goal—brings them a step closer to their aim of building a successful business.