You are here: Home / Archives for Dave Hochman 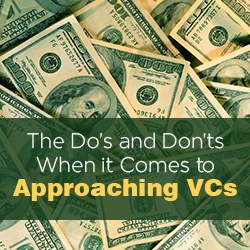 As an advisor to many early-stage entrepreneur clients over the years, I’ve experienced the excitement of witnessing venture capital funded startups blossom into thriving mature companies. I’ve also seen seemingly well-deserving ventures unnecessarily flounder because they failed to land more than one or two introductory investor meetings.

And, although securing the initial funding is only the start of an extensive and exhaustive process, the reality is that many entrepreneurs seeking startup capital from VCs fail to make it past the gatekeepers. No matter how viable the venture may actually be, there is zero chance of VC funding without a successful first approach.

Entrepreneurs can, however, increase their chances of getting that first meeting and securing initial funding by acting strategically and understanding a VCs motives.

This article will advise startup entrepreneurs as to some of the successful methods – as well as pitfalls to avoid – when it comes to approaching VCs.

DO: Your homework and “pre-qualify” your target list. Focus on pitching VC’s who have experience in the domain or business model of your company, as they’re much more likely to be a good fit. “Do your homework on the VC and the fund, gather as much info as can be gleaned simply by reviewing the relevant and publicly accessible blogs and websites,” counsels Bob Goodman, a partner at Bessemer Venture Partners.” You’ll know what you’re dealing with, and you’ll show the VC that you do your homework.”

DO: Secure an introduction to a VC via a 3rd party contact. Before you start to reach out to specific VCs, look for someone who is known (and trusted) by the both entrepreneur and the VC. The reality is that cold calling or cold emailing is very unlikely to be fruitful. Look at the VCs portfolio companies for common connections

DO: Craft a personalized narrative in your pitch. Statistics are important, but in order to attract the VCs attention in the initial approach, the email or pitch should contain more than data. According to Ian Sigalow, a Co-Founder and Partner at Greycroft Partners, “before we take a meeting, we think its very important to understand the motivations and driving forces behind the venture, and we like to know why the founder is launching this company,” Ian said. “And to clarify on the motivation question, ‘we plan to make many millions of dollars’ is not a winning answer, and not likely to impress.”

DO: Have realistic and accurate financial projections. Bob Goodman: “Too often people will show up with silly ‘hockey stick’ projections, and all that it really serves to accomplish is an undermining of the entrepreneurs’ credibility.” Brent Sonnek-Schmelz, formerly a principal at a private equity fund and currently CFO and GC of Soccer Post, (the largest chain of soccer specialty stores in the country) added: “The key is demonstrating a good market opportunity and explaining a path to growth and profitability that makes sense; and you can have an upside case, if everything goes perfectly, but be realistic an assume there will be some bumps.”

DON’T: Succumb to paranoia. Says Bob Goodman; “in too many cases, we encounter entrepreneurs who are unable to attract our interest beyond the initial query simply because they’re too secretive, for example, asking for an NDA upfront. VC’s can’t sign thousands of NDAs, plus, their idea itself isn’t usually that valuable or secret; the challenge is the execution.”

Bob added: “of course if there’s some super-secret sauce, no need to disclose that without NDA but the business and business model should be explainable in the initial contact prior to any sort of NDA request.” Brent agrees, advising “your business is 100% worthless until you are actually doing something, and even then it is still most likely worth nothing, so worrying about people stealing your idea while trying to approach VCs does not serve you well.”

DON’T: Be unnaturally aggressive, effusive or gregarious in your initial pitch or email. Obviously, VCs want to see passion on the part of the entrepreneur, but take care to maintain an air of professionalism. “Make your points clearly and succinctly and your query has a much greater chance at garnering notice, while using hyperbole in your entreaties will have its exact opposite intended effect on most VCs,” says Ian Sigalow. “And absolutely do not use overly causal tone, slang or text-speak.”

DON’T: Send multi-page documents filled with dense, technical explanations. “Don’t send a legalize baked document, just a simple PowerPoint will be enough, said Bob Goodman. This is key, as the entrepreneur needs to “be able to explain what you do quickly and articulately,” counsels Brent Sonnek-Shcmelz. “Bore people, and you don’t get investment, so keep it short and simple,” he added. “Be able to explain everything in 1-3 pages max – from business concept to market strategy to team, a quick ‘exec sum’ of 1 page, and then a 10 slide deck to go deeper, and in most cases, that about does it before the first meeting and anything more is useless.”

So before you burn a lot of time, energy and resources gearing up for your initial fundraising efforts, brush up on VC-pitching etiquette with these tips and advice.