You are here: Home / Industry News / Anyone Can Now Become a VC Investor 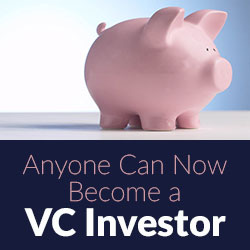 Venture Capital Investing for the Rest of Us

Fans of crowdfunding operations in the United States like Kickstarter will be excited to know that a financial revolution just happened this week. Prior to Wednesday, one had to have $1 million in net worth or income of at least $200,000 for each of the last two years in order to become an “accredited investor” and hence be able to easily invest in startups. As part of the implementation of Title IV of the JOBS Act, the Securities and Exchange Commission has now relaxed the rules, allowing startups to raise up to $50 million by selling stock online to small investors.

The democratization of investing is underway. Anyone can now become a VC investor, and unlike with the Kickstarter model they will have an actual stake in the company. This opens the way for small investors to be connected to small companies that would otherwise find it difficult to get funding through more traditional means.

In the interests of preventing a sudden repeat of the dot-com bubble, and protecting investors from potential scams, there are still some restrictions. Individuals can only invest up to 10 percent of their net worth, and the $50 million limit on startups includes equity, debt or convertible debt-to-equity arrangements. Offerings will still need to be vetted by the SEC in a process that still requires some legal assistance, but it is more straightforward and accessible than a full IPO.

Online platforms offering the investment service still need register with the SEC as “broker-dealers.” and will be subject to the same regulations as other institutions authorized to act as financial middlemen.The way in which startups can solicit for investments will also be regulated, particularly on social media. There is also no requirement for startups to create a system that enables potential investors to share information among themselves.

Crowdfunding is taking off around the world, and the World Bank estimates that by 2025 the global equity crowdfunding market will reach the $93 billion mark.

Some commentators have warned that there is a technology bubble currently inflating, however others point out that unlike the dot-com bubble of the late 1990s and early 2000s, more of the technology companies in Silicon Valley are actually producing revenue this time around, and the maturity of the internet means that companies are succeeding in markets today where early entrants failed last time. With that being said, some valuations have been described as “excessive,” such as Snapchat’s rejection of Facebook’s offer to buy the company for $3 billion in 2013.

Will the SEC’s regulations be enough to prevent inexperienced investors from flooding the market with more money than sense? Will they lead to a vibrant rejuvenation of a new generation of dynamic startups? Time will tell.

Joanna Jana Laznicka has worked with startups and venture capital firms in Silicon Valley, Orange County and Canada for the past 22 years. You can connect with her on Twitter or LinkedIn