You are here: Home / Startup & Funding Tips / How Does Angel Investing Differ from Venture Capital?

Angel investment and venture capital are each critical to a high-growth startup’s funding strategy. While there are similarities and some overlap between the two, angels and VCs may invest differently based on their investment goals,  the stage of company they invest in, and the volume of capital they have to invest.

Angels are accredited investors, wealthy people who invest their own money in entrepreneurial companies. Angels may invest as individuals, as members of an angel group, or through an angel fund. Recent reports estimate that angels invest more than $24 billion annually supporting more than 64,000 startups. Almost 60 percent of angel activity is in pre-seed and seed investments. 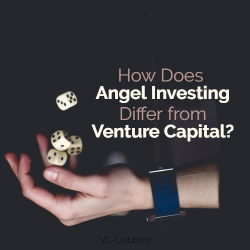 VCs represent venture capital funds of investment dollars from sources that include high-wealth individuals, corporations, pension funds, or public entities. An investment manager manages the venture capital fund. VCs are active across most of the startup lifecycle but spend about 70 percent of their time in post-seed deals.

In terms of dollars invested in pre-seed and seed businesses, participation by angels and VCs is more similar, at 30 percent and 35 percent respectively. This is due to the sheer volume of VC’s participation across the entire startup life cycle. VCs are involved in 85 percent of A through C deals. As startups grow, angel participation in later stage deals declines somewhat, while VC participation increases significantly.

Angels are often the first equity investors in a company. The average reported angel deal size in 2017 was around $637,000. Syndication is common across angel groups to create rounds with enough capital to meet the needs of early stage companies. When venture capital funds invest in seed stage companies, those rounds are typically larger than angel-only rounds.

Last year, two-thirds of venture capital-funded seed rounds were between $1 and $5 million. It is not unusual to see venture capitalists and angel investors syndicate on larger seed round deals or on follow-on investment rounds, particularly in regions of the country where venture capital is less plentiful.

Most angels take a hands-on approach to de-risking companies.

Angels understand entrepreneurs and what it takes to start a company because many of them (more than half according to The American Angel Report, the largest ever study of angels) were founders or CEOs of their own startups.

From due diligence to board participation, angels like to get involved. Many cashed out entrepreneurs see angel investing as a way to continue to participate in the startup world and give back to the community. About 60 percent of angels with an entrepreneurial background accept an advisory role and more than half take a board seat.

Seed stage startups and their lean founding teams benefit from angels’ operational and functional expertise. With extensive industry connections, angels also help startups reach potential business partners, potential customers, technical resources, and more. This isn’t to say that VCs don’t also share expertise and connections with their portfolio companies. Their advice and contacts are invaluable. However, VC involvement may be more structured and conducted through board of director activities.

Angels tend to invest close to home and are more diverse.

Most angels typically invest in regions where they live and in industries they know; there are active angel groups in virtually every state. While 20 percent of angel deals also take place California, nearly two-thirds of angels responding to the American Angel Report don’t live in the big three (Boston, San Francisco, and New York). Excluding California and New York, angel-backed deals represent from 60 to 80 percent of the funded deals in the other regions of the country. That’s not a surprise, as the majority of VC activity is concentrated on the Coasts.

Angel investors pursue deal flow via angel groups, individual angels, friends, associates, and from direct engagement with entrepreneurs. When it comes to industry sectors, software leads the list considering 51 percent of angel investors reporting through the Halo Report have a background in technology.  More recently, consumer products and services sector deals have moved into second place.

What does this mean for an entrepreneur?

Neither angels or VCs are typically a fit for all stages of a company’s growth. It’s important to determine which angel and angel groups are viable options, and which VCs are the right VCs, if any,  to work with, based on the startup’s stage of growth.

An earlier stage company should consider angels for funding, as well any VCs specifically focused on early stage opportunities.  A later stage company will typically rely less on angels as a funding option, seeking out instead VCs who primarily work with later-stage or breakeven and revenue-generating companies.  Building relationships with a diverse array of investors can lead to the right funding opportunities at the right time.

An entrepreneur who understands the differences between angels and VCs, can build a realistic capital strategy. Before you begin to approach potential investors, make the process more efficient and successful.

While angel investors and venture capitalists share the common goal of achieving above average returns, they invest and operate differently. An entrepreneur who understands the differences, can build a realistic capital strategy and plan that matches the right source of capital to the appropriate milestones and stage of the business.

Note:  These two reports, referenced in this article, are excellent sources of information about angels and how they invest: The American Angel and 2017 Halo Report. Inclusive Entrepreneurship: Growing the Startup Economy through the Power of Inclusive Entrepreneurship discusses the opportunities for angels and VCs to accelerate startup success though inclusion and diversity.

Advice for Entrepreneurs: Smart Capital Beats Dumb
How to Make a Venture Capitalist Cringe - 7 Phrases to Remove From Your Pitch
Biggest Lessons I Learned While Building Past Startups - Interview with Emanuel F. Barros
Pre-Seed Financing Tips - Go With The Flow

Tom has been helping entrepreneurs build great companies for most of his career. He’s formed multiple venture capital funds, founded angel groups, and is an active angel investor. As the CEO of Rev1 Ventures, Tom has built an experienced team that has invested in more than 75 startups and added more than $70M in capital to the Columbus, Ohio region in under five years. This growth has helped Columbus to be named one of the fastest-growing startup cities in the US according to the Kauffman Foundation and Rev1 named the Most Active VC in the Great Lakes region, according to Pitchbook. Before forming Rev1, Tom spent much of his career focused on innovation, startups and early stage capital – first from the corporate sector within Battelle – and then regionally, building innovation and startup support systems in Oklahoma, Ohio and advising several regions of the United States and the United Kingdom. He feels strongly that in order to fuel startups, you must connect the assets in your own back yard. This includes corporations, service providers, academic and research institutions, and public sector entities. He’s the author of The Entrepreneur’s Path: A Handbook for High-Growth Companies.